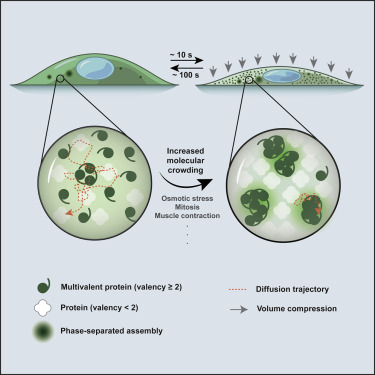 A team of scientists including Drs. Sethuramasundaram Pitchaiya (co-1st and senior author), Lanbo Xiao, Marcin Cieslik, and Arul Chinnaiyan (co-senior author) from the Michigan Center for Translational Pathology, and Dr. Pushpinder Bawa, Xia Jiang, Abhijit Parolia, in collaboration with Dr. Mats Ljungman and Karan Bedi, from Radiation Oncology, and Drs. Ameya Jalihal (1st author) and Nils Walter (co-senior author) from Chemistry, published a ground-breaking study in Molecular Cell entitled “Multivalent Proteins Rapidly and Reversibly Phase-Separate Upon Osmotic Cell Volume Change.” This publication was featured on the cover of Molecular Cell along with a Preview written by Drs. Sumit Majumder and Ankur Jain, both from Whitehead Institute for Biomedical Research in Cambridge, MA.

This research team discovered that proteins with the capacity to multimerize quickly responded to osmotic changes (dehydration) caused by high saline or sugar concentrations, condensing into aggregates resembling processing bodies (P-bodies). The reaction, known as hyperosmotic phase separation, or HOPS, takes only a few seconds and is reversible within less than 2 minutes. Thus, proteins that undergo hyperosmotic phase separation seem to be first responders of osmotic stress.

“At the fundamental level, our work has unraveled a new paradigm for subcellular (membrane-less) organization and rapid stress response,” says Pitchiaya.

When a cell’s proteins are faced with dehydration, HOPS quickly engages to protect the cells from osmotic stress. This newly discovered phase separation and sequestration in response to changes in cell volume is an important discovery.

“When proteins are quickly forced to be in a smaller volume, those that can multimerize appear to sense this change. The response is dramatic, and is remarkable because cells typically take much longer to respond to changes in the environment,” says Jalihal.

While HOPS does not damage the cell itself, it can change how some genes function. “This hyperosmotic phase separation is widespread and potentially acts during cell-adhesion, invasion and migration and is relevant in nephritic function/pathology and tumor biology,” explains Pitchaiya.

Cells of the kidney, liver, and GI tract are particularly susceptible to dehydration. HOPS of CPSF6, for example, explains the previously unknown cause for transcription termination defects during osmotic stress.

Walter clarifies the concept, “Just like water vapor condenses into clouds in the sky before a rain, we believe that we have discovered a fundamental cellular process that responds to environmental changes.”

"What led us to this discovery? Seredendipity. It was an experimental blooper," describes Pitchiaya. "We were essentially trying to perturb P-bodies (cellular sites of RNA storage/decay) to understand their impact on RNA regulation. Such microscopy-based assays are typically done in a dark room and it was also late at night. A combination of these aspects led to the addition of the wrong buffer (high salt) to the cells and that led to a large number of subcellular bodies - and thus began the voyage."

The work also stands to explain how modulating energetically expensive processes, such as transcription and RNA processing, via sequestration of proteins in dysfunctional clusters may serve a cytoprotective stress response mechanism. Moving forward, the team is now interested in understanding the impact of HOPS on cell survival and RNA metabolism, and whether there is a link between HOPS and cellular memory of stresses.

—
The full publication in Molecular Cell Press is accessible here.

A special thanks to Elisabeth Paymal for her significant contributions to this article.