By Elizabeth Walker | 17 May

As part of the program, medical technologists from the laboratories serve as lab ambassadors, liaisons to the nursing staff in the clinical care units. "It's amazing, because they can see who we are,” says Lab Ambassador Amy Drouillard, a technician in the Microbiology Laboratory. "We're always behind a closed door,” but thanks to the program, nurses have a point person to contact when problems arise. Saira Ramirez, who also works in the Microbiology Laboratory explains: "If a nurse needed help with a certain issue, then they would contact the liaison from that particular lab to try to find a solution.” This allows questions to be answered quickly and efficiently.

Kristina Martin hopes more people will volunteer to serve as ambassadors in the coming months. "Ideally we would have someone from every lab. That's the goal."

One of the first tools that the Lab Ambassadors Program distributed was the Order of Draw card, a quick visual reference for the order in which multiple tubes of blood should be drawn. Ambassadors also arrange educational opportunities with the nursing staff, helping them understand the minimum volumes needed for various tests, the difference between urgent and routine testing, how to properly label and transport specimens.

"It can be empowering and make staff feel like they are part of something bigger. It gives them ownership.”
Saira Ramirez 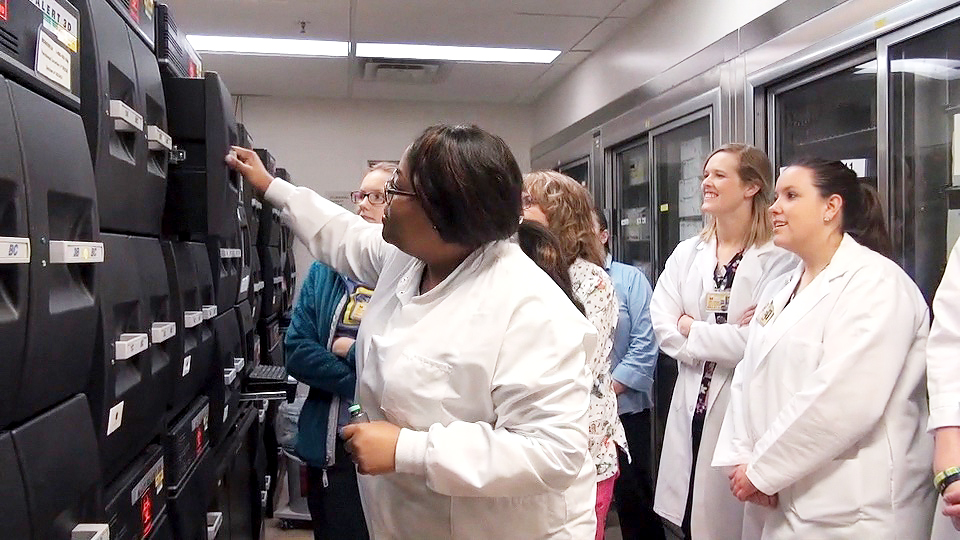 As part of Medical Laboratory Professionals Week, held each year in April, ambassadors organize lab tours, which are recorded for those who are unable to attend in person. Nursing staff, and all other interested parties, are invited to, "see the different labs, ask questions, just get a better feel for the institution that they work in and the people that are down here,” says Ramirez. Feedback from those who have attended tours has been very positive, with suggestions that every nurse should be required to tour the laboratories.

In addition to improving communication between the nursing units on the patient floors and the laboratories, the Lab Ambassador program increases morale. Says Ramirez, "It can be empowering and make staff feel like they are part of something bigger. It gives them ownership.”

While the program was once thriving, participation has been down in recent years due to staff moving on to new positions or needing to focus their efforts on other responsibilities in the labs. The program is now undergoing a re-launch and in addition to Ramirez and Drouillard in microbiology, the team includes Blood Bank's Kelley Delaney, Cytology's Jenise Fallen, Surgical Pathology's Sally Smith, and Hematology/Coag's Jenn Babinchak, Alicia Kuzia, and Ruth Miller. Jennifer Morey, Merry Muilenberg, and Amy Rosendaul from Chemistry, have also joined the Ambassadors. Laboratory staff interested in joining the Lab Ambassadors Program can contact Saira Ramirez at sgramire@med.umich.edu or Amy Drouillard at amydr@med.umich.edu.

Drouillard appreciates that working as a lab ambassador has given her a voice and allowed her to better connect with her colleagues. "When you're more involved, you're more engaged. Your world opens up to this amazing hospital!"