The field of pathology has changed dramatically in the 55 years since Peter Ward, M.D., graduated from the University of Michigan Medical School. Here, he reflects on those changes, and on his tenures at U-M as chair of the Department of Pathology, interim dean of the Medical School, and the Godfrey D. Stobbe Professor of Pathology, Immunology/Inflammation 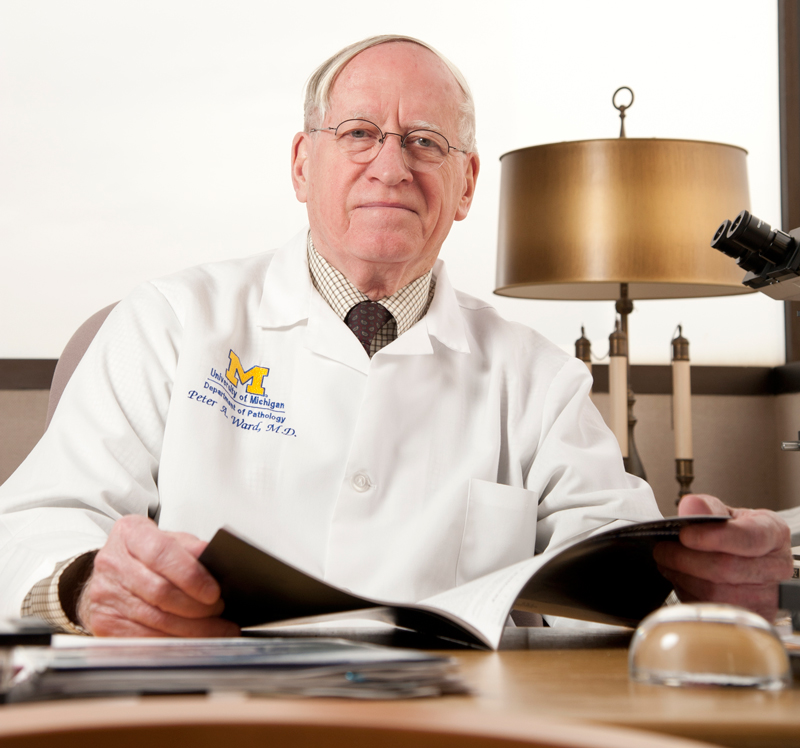 Dr. Peter Ward posing for his Endowed Professorship portrait.
Photo by Elizabeth Walker In the summer of 1980, I returned to the University of Michigan as chair of the Department of Pathology, where I had trained as a resident. At that time, the Department had over 50 full-time faculty members, with strong clinical programs representing all the subspecialties. The Department was also known for its excellent teaching programs. As chair, I wanted to build our research capabilities. As a first step, several teaching laboratories were relocated to the adjacent School of Nursing in order to free up departmental space for 5 modern research laboratories.

The 1980s were an exciting time for pathology research. My own work was in the field of complement and immunopathology with an emphasis on inflammation: Why and under what conditions was it involved in lung disease? Complement is a series of plasma proteins that are involved in immune defenses against infectious agents. Several of my younger colleagues moved with me from the University of Connecticut Health Center, where I had previously served as department chair, to research these questions at UMHS. As immunology became more sophisticated, it became clear that many diseases were triggered by an immune response. The development of tools such as ELISA assays provided fast, larger-scale methods for measuring immune responses in individual patients. Suddenly, my U-M colleagues and I had access to a wealth of new detection systems.

Two years into my tenure as chair, I assumed duties as interim dean of the Medical School (1982-1985). One of my roles was to help the basic science departments increase their research funding through R01 grants. I supported enhancing collaborations between the basic sciences and the various clinical departments. The National Institutes of Health (NIH) encouraged clinically-related research because the results helped justify congressional funding of the NIH. In fact, between the end of World War II and up until just ten years ago, Congress expanded the NIH budget from 7-12% per year. This was possible because legislators appreciated how NIH-supported research allowed clinicians to provide better treatments. For example, between the mid-1950s and the 1980s, the incidence of cardiac deaths from heart attacks plummeted and lifespans increased because of better treatment of cardiovascular diseases.

Here in the Department of Pathology we collaborate with a number of clinical programs. For example, for the past 15 years, Pathology has partnered with the Department of Urology using genomic sequencing to identify specific types of prostate tumors and predict how they will respond to various therapies. As a result of this kind of cancer research, there has been a tremendous evolution in the specialty areas of pathology. Surgical pathologists can now relay much more information about a particular tumor. The patient’s physician can then use this information to determine whether and how to treat it. We’re seeing things we never dreamed of even ten years ago. It’s a fascinating time.

In 2005, then-Dean of the Medical School Allen Lichter and I agreed that after 25 years of my being chair of the Department of Pathology, it was a time for change. Jay Hess, M.D., Ph.D., M.H.S.A., was recruited as my replacement. Hess had trained as a diagnostic surgical pathologist and was working as a hematopathologist at the University of Pennsylvania. He had expertise in defining molecular mechanisms in cancer, especially in hematologic cancers. With his arrival at UMHS, Dr. Hess played a key role in expanding an epigenetics research program in Pathology, recruiting new faculty with expertise in leukemia, transcriptional activation, histone modifications, genome deep sequencing, and use of mouse leukemia models. The epigenetics and leukemia group has published several important papers, which have made meaningful contributions to the translation of basic science research into clinical practice. Dr. Hess also recruited Jeff Myers, M.D., A. James French Professor of Diagnostic Pathology, to lead the Division of Surgical Pathology. Kojo Elenitoba-Johnson, M.D., was also recruited and helped develop the new Molecular Diagnostics Laboratory.

Soon thereafter, the Medical School created the Strategic Research Initiative, which aligns the Medical School and UMHS around a common research vision. Among other projects, the program supports the Protein Folding Diseases Initiative, which provides funding for the study of protein folding diseases. This research is currently led by Pathology researchers, working in collaboration with other U-M scientists. By the time Hess left UMHS in 2014, he and his colleagues had developed a state-of-the-art, sophisticated proteomics core laboratory that would have very positive impacts on research programs in Pathology and beyond.

In the fall of 2015, Charles Parkos, M.D., Ph.D., from Emory University, became chair of Pathology and the Carl Vernon Weller Professor Pathology. Parkos is well-known for his research into the role of junctional proteins that regulate the epithelial barrier in the small bowel. The Department of Pathology appears to be in excellent hands for the coming years.

Portrait of a young Dr. Ward.

Dr. Ward working in his office.

At a holiday party in the Towsley lobby.

With regent Sarah Power at the groundbreaking for the current U-M Hospital which opened in 1986.

Dr. Ward overseeing the work with staff on the current U-M Hospital.