The Smallest Among Us 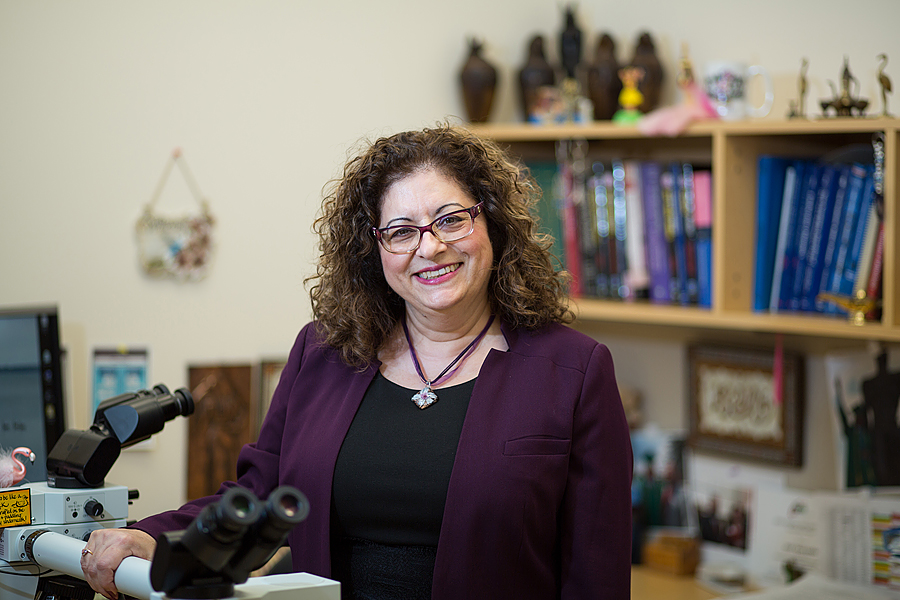 It was the detective work that first drew her to pathology—the chance to solve the riddles that underlie death and disease.

But it’s the humanity of her work that keeps Raja Rabah going: The child who fails to respond to conventional chemotherapy. The mother who doesn’t know why her infant died, or whether it’s safe to risk another pregnancy. The father who worries that his daughter is genetically predisposed to the same cancer that killed his wife.

It’s the families who spent four hours ferrying their dead children to East Jerusalem so that, during the seven years she ran a pathology department in the city’s Al-Makassed Hospital, Rabah could diagnose the cause of death, and the families could begin to achieve some sense of closure.

A Palestinian born in the West Bank and raised in Morocco and Syria, Rabah opened a pathology department at Al-Makassed in 1987—not long after receiving her MD from Damascus University Medical School and completing her residency at New York University, followed by a fellowship in pediatric pathology at the University of Pittsburgh School of Medicine. The department was the first of its kind to serve Palestinians in the West Bank.

“It was extremely important for me to go and serve people there,” says Rabah, today a professor and director of pediatric pathology at U-M. “Because I knew they had nothing. I felt like I had to pay back.”

She knew she was filling a deep need—so deep that although she set out to serve only patients inside the hospital itself, soon people were coming from all over the West Bank to seek her expertise. Soon she was receiving weekly deliveries of tissue specimens from Gaza. “Thursday was my Gaza day,” she remembers.

The need was so deep that Rabah stayed on at Al-Makassed Hospital through the First Palestinian Intifada and the First Gulf War. She stayed on through curfews, shootings, suicide bombers. She stayed on despite seeing children killed before her eyes, despite having her car stoned by protesters three separate times while she was driving.

By 1994 the situation was so difficult that Rabah and her husband, physician Adnan Hammad, felt they had no choice but to leave. They were living in Ramallah, in the West Bank, with their two young sons. The drive to East Jerusalem was only twenty minutes, but the checkpoint between the West Bank and Jerusalem closed so often they found themselves routinely trapped on one side of the border or the other. Rabah would get a call from the daycare center in Ramallah asking her to pick up her children, but she couldn’t get there. Or, like many physicians, she’d get stuck at the checkpoint, unable to reach her job.

Reluctantly, she and Adnan decided to “explore other chances.” Through a colleague at Pittsburgh, Rabah learned of a job at Wayne State University, and in 1994 she and her family moved to southeast Michigan. Adnan eventually became director of the Community Health and Research Center at the Arab Community Center for Economic and Social Services (ACCESS) in Dearborn. The couple received U.S. citizenship. For Rabah, it was the first time she’d had a passport that said: “this is your nationality.” The West Bank is not a nation, she explains, and although she grew up in Morocco and Syria, she’d never been a citizen of either country.

Rabah stayed at Wayne State for 15 years and then joined the pathology faculty at U-M. In Ann Arbor, as in East Jerusalem, she draws inspiration from the human connections that define her field. To pinpoint the cause of a child’s illness or uncover a genetic disposition, she says, to help clinicians outline a course of treatment—“that motivates me. Each child I help, even if it’s a simple problem, that’s satisfaction.” 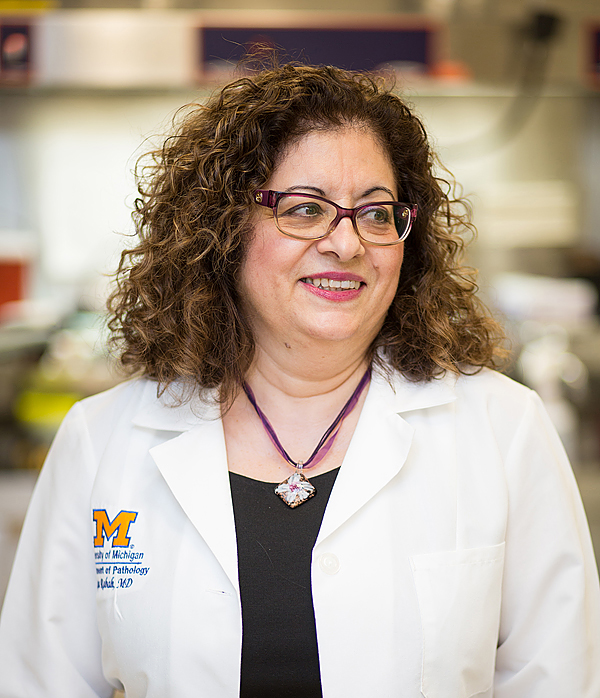 She’s keenly aware that to many people, pathologists are “inhuman,” and she’s working to change that perception. With a multidisciplinary team at C.S. Mott Hospital, she’s developing ways to make autopsy reports more accessible to families, to revise processes and procedures to be more family-friendly. She’s long welcomed the chance to meet with families in person and help them understand autopsy reports and diagnoses and their implications—for siblings, for future pregnancies, for the family at large.

“I know people think this is really not human, to do autopsies, especially in children,” she admits. “But I think of it as a medical procedure, and my findings are extremely important in many things regarding the grief process for the family.” Her reports help parents understand what went wrong and help show clinicians how to care for the next patient with a similar condition. “Knowing that I contributed to the knowledge—and to, I think, the closure of the family—that’s an important process overall,” Rabah says.

Her small office on the 11th floor of Mott is a vibrant reminder that pathologists are indeed human. Rabah’s bookshelves are crowded with mementos from the Middle East and photographs of her grown children. On the wall opposite her desk, she has hung a portrait of the Medieval Arabic physician Ibn al-Nafis, who helped lay the foundations of modern medicine. The painting shows him treating a child. It’s a reminder that, as Mahatma Ghandi said, “a nation’s greatness is measured by how it treats its weakest members.”

While she grieves for her homeland in the Middle East, and the bloodshed that grips the region, Rabah thrives on the knowledge that wherever she lives and works, she is helping to heal the smallest, most vulnerable of human beings—children, some of them just hours old. Under the microscope, she says, “a tumor in a Palestinian child looks exactly the same as a tumor in a child in the U.S.” We are bound by our humanity.