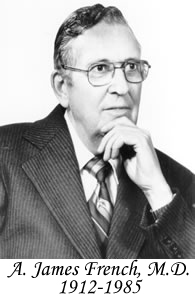 Dr. French received his M.D. degree from the University of Colorado School of Medicine in 1936. After completing a rotating internship at General Hospital in Kansas City, Missouri, Dr. French served as Assistant Resident in Pediatrics at Children’s Hospital in Denver, Colorado and completed a residency in Pathology at St. Louis City Hospital. He joined the faculty of the University of Michigan Medical School in June 1940 as Assistant Resident. Dr. French served as First Lieutenant in the United States Army, first in the reserves and with the advent of World War II, on active duty (1941-1946) rising to the rank of Lieutenant Colonel. He served as a Colonel in the United States Army Reserves from 1962-1973. In 1956, Dr. French was appointed to the Chairmanship of the Department of Pathology, University of Michigan Medical School succeeding Carl Vernon Weller, M.D. Dr. French was instrumental in the development of Clinical Pathology as a disciplinary part of the Department of Pathology and over the years, under his direction, the Department of Pathology became responsible for the Hospital Laboratories. During his Chairmanship, the Department of Pathology flourished and became one of the premier Departments of Pathology in its teaching and service characteristics. Throughout his career, Dr. French received numerous awards and honors including Pathologist of the Year (1973) from the College of American Pathologists, and the Distinguished Service to Pathology Award in 1977 given jointly by the American Society of Clinical Pathologists and the College of American Pathologists. Dr. French was an active member of the American Board of Pathology serving as Trustee from 1962-1974; as Secretary-Director from 1964-1972; as President in 1973 and as its first Executive Director from 1974-1979; The Michigan Society of Pathologists, serving as President from 1950-1951; The International Academy of Pathology where he held the offices of Vice-President (1964-1965); President-Elect (1965-1966) and President (1966-1967), as well as numerous other professional societies.  Dr. French became an active Emeritus Professor in June 1980.

In 1992, the Society in conjunction with the University of Michigan initiated a successful campaign and endowed a Chair in his honor - The A. James French Endowed Professorship in Diagnostic Pathology.