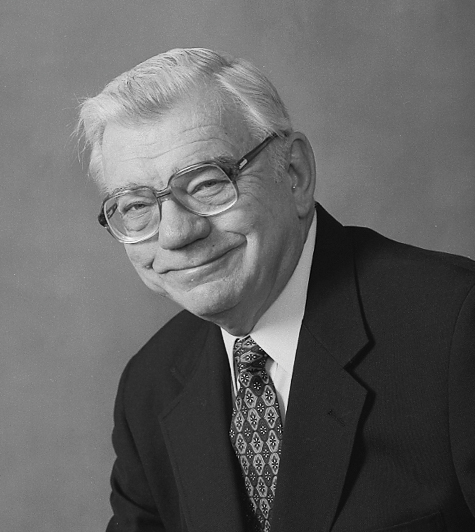 (Above) Portrait of John E. Finger, MD; (Header) John H. Finger, MD receives vase from Charles Parkos, as a gesture of appreciation for his father’s work and family’s charity.When John H. Finger, MD was growing up, there were directions for donating a body to science, hand-inscribed by his father, posted near the phone. While other children were making snow angels with their dads and being read bedtime stories, John’s father taught him how to make Y-shaped incisions in snow banks and read him excerpts from Where Death Delights, the story of Medical Examiner Milton Helpern. Five-year-old John thought it was creepy and wondered why. “I’m a pathologist,” his dad replied. “We deal with the dying and the only way you can really learn about the living, is to understand the dying.”

Finger’s father, John E. Finger, MD, grew up in Saginaw, MI and graduated from U-M with his undergraduate degree in 1950 and his medical degree in 1954. After serving in the Army Medical Corps for a few years, he returned to U-M in 1960 to do his residency in pathology and was the Assistant Chief of Pathology at the Ann Arbor VA. He spent the duration of his career in many leadership roles at both St. Luke’s Hospital in Saginaw and at Midland Medical Center before retiring in 1999. Several years later, he was diagnosed with esophageal cancer. “I think that anybody who’s in the business knows that’s basically a death sentence,” Finger says. He was worried his father wouldn’t pursue treatment, but he did. He wanted to go back to U-M.

For seventeen months, father and son made trips back and forth to U-M hospital. “It was during those drives that I learned he was not a creepy, weird pathologist. He was a really good human being,” Finger says. They would take walks to pass the time, Finger pushing his father in the halls in a maize and blue wheelchair, visiting the Medical School class pictures and sharing stories along the way. “We ended up in Pathology all the time. He was in his element there,” Finger recalls. “That’s when I decided what we needed to do.”

When Finger received the call that his father had died, he contacted Anatomical Donations. Then, he and his family made arrangements to contribute to the Department of Pathology establishing the Dolores M. and John E. Finger, MD Forensic Lecture. Their gift will introduce trainees to the importance and appeal of a career in forensic pathology, through invited lecturers. The inaugural lecture, The Investigation of Undocumented Border Crossers: The Tucson Triangle, was given by Dr. Gregory Hess, Chief Medical Examiner at the Pima County Office of the Medical Examiner in Tucson, Arizona.

Dr. Jeffrey Jentzen, U-M Director of Autopsy and Forensic Services, says that the work being done by the Pima County office was the perfect example for students. “I couldn’t think of anything better to demonstrate how forensic pathology is a public health entity and how we work, as we talk about how death helps the living,” he says. “How we as forensic pathologists help identify lost family members and how we assist other agencies.”

Finger was proud to represent his family as Hess gave his lecture. “It’s the Circle of life,” he said. “He started here, he’s back here. My dad never had a funeral, never had a eulogy. This is what he’d want. He’d want to pass this on.”

Interested in making your own impact on our trainees or patients through a financial gift? Donate directly at the medical school's Giving to the Department of Pathology webpage or contact Assistant Director of Development, Jason Keech, by email at jkeech@umich.edu or by phone at (734) 763-0866.