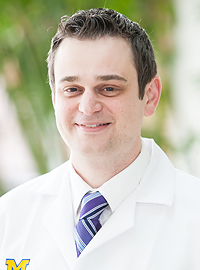 After more than a decade away, Dr. Richard Cantley is excited to be back at the University of Michigan, where he not only completed his undergraduate studies but also met his wife, Nicole Tuttle. The Department of Pathology welcomes him as the newest addition to our faculty in cytopathology.

Upon graduation from U-M, Dr. Cantley attended medical school at Saint Louis University in Missouri, did his residency at Rush University Medical Center in Chicago, Illinois, and completed a fellowship in cytopathology at Northwestern Memorial Hospital, also in Chicago.

Most recently, he was at the University of Toledo for over four years where he was Assistant Professor, Director of Cytopathology, and Associate Director of the Residency Program.

Dr. Cantley’s experience during his first years as an attending at Toledo reinforced that there was a patient behind each slide, and that what he saw in the microscope was just one piece of the entire clinical picture. “In residency and fellowship my focus was more on the morphology and pattern recognition,” he explained, “but at Toledo, I gained a greater appreciation of pathology’s role in a more team-based approach to patient care.”

His education also continued through his involvement with the Residency Program. “You never learn something as well as when you have to teach it,” Dr. Cantley said. “You have to understand something on a much deeper level in order to educate others about it.” He also enjoyed this role because all medical students at the University of Toledo are required to do pathology rotations. “It was great to expose all med students to pathology”, he continued, “because basically every single specialty in medicine is adjacent to pathology and it’s nice to be able to provide perspective so they understand more about the process involved in providing diagnoses and lab results.”

Dr. Cantley also ran a fine needle aspiration (FNA) clinic, primarily performing biopsies on thyroids. They did a lot of outreach for the program, going into the community and discussing the clinic with physicians and giving lectures on the topic. Their work created a unique situation in which pathologists brought in hundreds of patients who were completely new to the hospital. “I’m very proud of the job we did on the service,” Dr. Cantley stated, “While the average non-diagnostic rate for thyroid FNAs is about 10%, ours was at 0%.”

Even as an undergraduate, Dr. Cantley knew he was interested in a career in pathology. “I had taken courses on cancer, microbiology, and immunology and realized my main interest was in the disease process,” he said, reflecting on his coursework at U-M. His strong interest in cytopathology is for many reasons, but overall, he likes that it is such a broad specialty and that he can see specimens from essentially every organ system.

"One of the only ways to get better as a pathologist is to expose yourself to a lot of different cases..."

Both Dr. Cantley and Nicole had their eyes on eventually returning to Ann Arbor, but even more exciting are the opportunities his new position brings. He finds both the larger case volumes and the availability of academic opportunities at U-M to be extremely attractive, saying that “One of the only ways to get better as a pathologist is to expose yourself to a lot of different cases, and the high case volume and room for professional growth is a big part of the reason I was excited to come here.” 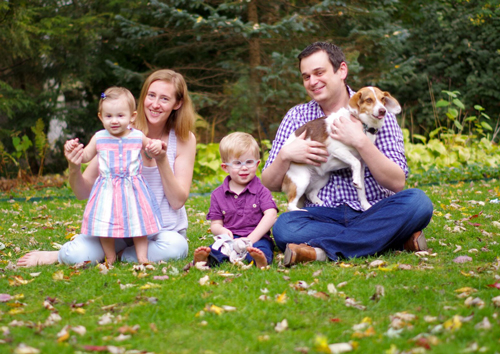 Dr. Cantley with his family (from left to right) Eleanor, Nicole, Felix and Penny.Though Dr. Cantley is entering only his second month on the job, he already feels at home in his new position. “It’s been great getting the lay of the land, both in the lab and across this enormous hospital, “he said. “Everyone has been extremely helpful and supportive.”

In the near future, Dr. Cantley plans to get involved in research. His interests vary across cytopathology, but he would specifically like to study the role of the HPV test in primary cervical cancer screening, with a focus on its sensitivity relative to the Pap test.

Dr. Cantley’s undergraduate years at Michigan were highlighted by football Saturdays and hanging out on campus with his friends. Now that he is back in Ann Arbor, he has enjoyed discovering the new restaurants, parks, and neighborhoods he didn’t know about as an undergrad. His wife, Nicole, also works at U-M as an Assistant Director at the Center for Research on Learning and Teaching (CRLT.) Work aside, they are both enjoying introducing their 4-year-old, Felix, 2-year-old, Eleanor, and their dog, Penny, to all Ann Arbor has to offer.