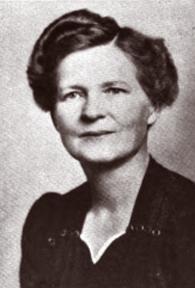 Dr. Ruth Cecelia WanstromRuth Cecelia Wanstrom, (AB, 1914; MD, 1918; MA, 1924) was born in Rockford, IL in 1893 where she attended public schools and Rockford College.  At Michigan she served as a Research/Teaching Assistant in Pathology, working under a special grant to study syphilis during 1922-24.  (Note - Pathology Chairman Aldred Scott Warthin was particularly known for his research on syphilis, writing over 40 scientific papers about late and latent syphilis in various organs).  Dr. Wanstrom continued this work and was made Assistant Professor in 1924-25, becoming only the second female faculty member in the department (following Dr. Harriet S. Taylor).

Ruth Wanstrom left the University to further her career, including a year spent doing post-graduate work at the University of Vienna.  In addition, she spent a year directing the Pathology Laboratory at the Woman’s Hospital in Detroit.   Upon her return in 1931 she joined the department as Assistant Professor.  Known as a brilliant scholar, she was especially renowned for her work regarding the pathology of infants and young children, the pathology of the eye and rare ovarian tumors.  She served as the President of the Women’s Research Club of the U-M, was a member of Sigma Xi, The American Medical Association, Washtenaw County Medical Association, the American Association of Pathologists and Bacteriologists and the International Museums Association.  In addition, she was a member of the National Formulary Committee in 1936.  From 1938-39 she served as president of the Michigan State Pathological Society. Dr. Wanstrom was known as an inspired instructor, and the Regents’ proceedings recognize her “… as one of our greatest teachers in the sophomore Medical Laboratory in Pathology.”

In 1937 Dr. Wanstrom became an Associate Professor.  She advanced to the academic rank of Professor in 1944 and served as the only full Professor of Pathology, male or female, (other than Professors and Chairmen, Carl V. Weller and A. James French) from 1944-1958.  Dr. Wanstrom retired and became a Professor Emerita with the best wishes of the Regents at age 65 in 1958.