Logwood - A History of Palettes, Pirates, and Pathology 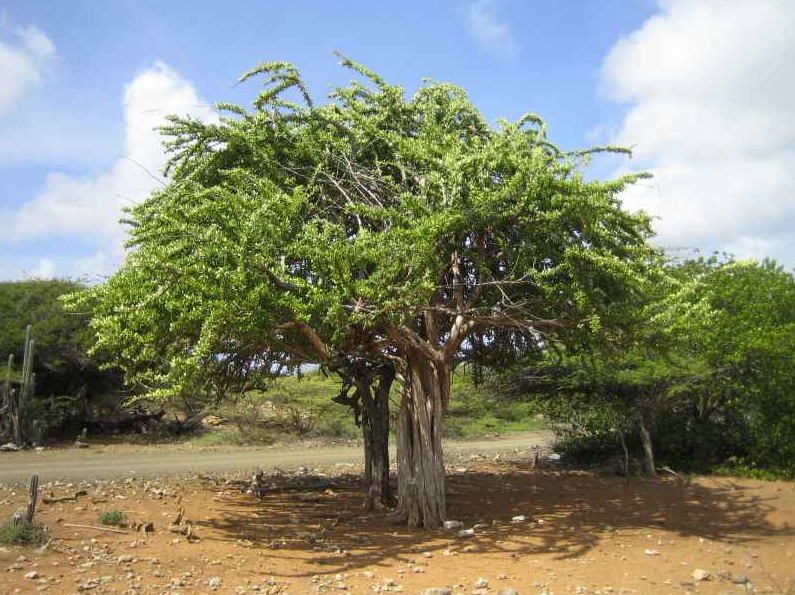 Logwood tree in Bonaire.  Photo courtesy of:  www.bihrmann.comWhat do the tropical logwood tree, Belize, pirates, Robert Hooke, the US Military, and Pathology labs around the world have in common? Find out in this week's #PathologyDYK.

Every Pathology lab uses the routine Hematoxylin and Eosin (H&E) stain for screening samples in anatomic pathology.  It is one of the oldest stains, with some hematoxylin staining protocols dating back over a hundred years.  Little do most people know that hematoxylin is a natural product from the legume logwood tree (Haematoxylum campechianum). The history of logwood is a fascinating story as this tree played a surprisingly exciting role in the early history of the New World, where it’s great economic importance helped to build nations and made it a coveted commodity of pirates in the Atlantic.

The logwood tree is a rather small, prickly tree that grows about 30-50 feet tall with a gnarled trunk resembling many stems fused together. The leaves are compound featherlike with oval or heart-shaped leaflets. Small yellow flowers grow in clusters and the trees also produce flattened pods, pointed at each end.

Logwood was originally prized as a textile dye. Common clothing in late 15th century Europe was rather drab brown or gray. Logwood yielded one of the dyes that would change the wardrobes of Europe by introducing a cheap source of color. Long used by the indigenous native Nahuatl people in the coastal Mexican area of Bay of Campeche, Hernando Cortez and the Spanish discovered that the beautiful blacks (popular in Europe), as well as purple and blue dyes, could be made from logwood chips. A natural resource from the New World was found.

The Spanish proceeded to export many tons of the debarked heartwood of logwood from the Yucatan coast to Europe. In the 1600s the British discovered logwood in coastal Central America. Because of its value, pirates from England, France, and the Netherlands would commonly attack these trade ships loaded with logwood, as a single ship was worth more than a year’s worth of other cargo. It became a commodity of great value and of political importance. 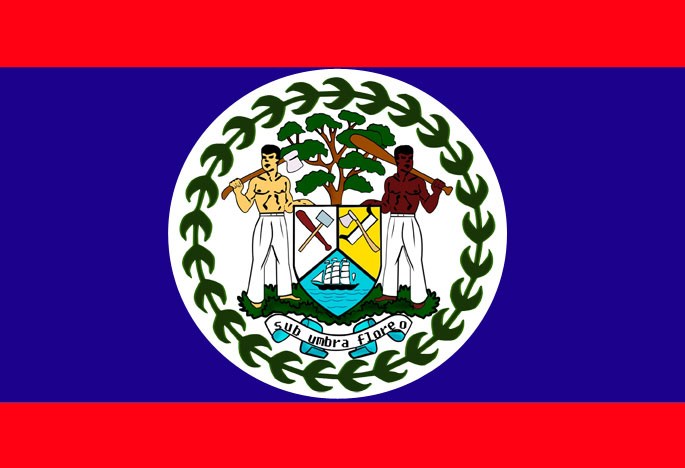 Flag of Belize, showing a white and black “bayman” harvesting logwood.Pirates soon found it was even more profitable to search for logwood on shore. In the mid-1600s logging camps, worked by “baymen”, were established in the swamplands of what would become British Honduras (and later Belize) to cut and export thousands of tons of logwood to England. Many slaves were used to help cut logwood from the mosquitoes infested swamps. In the 1700s and 1800s, up to 13,000 tons of logwood was sent each year. Logwood was so important that it was introduced into many West Indies and Caribbean islands, including Jamaica and Haiti, where it became naturalized and harvested on plantations. To this day, a black and white “bayman” is commemorated on the national emblem of Belize, appearing on its currency and the Belize flag. Britain and Spain remained the major distributors of logwood until the 1870s.

Hematoxylin means “bloodwood”, referring to the dark red heartwood. When the hematoxylin, derived from chips of the heartwood of the tree, is oxidized to form hematein and bound to one of several metal ions (Al3+, Fe3+ or Cr3+), the resulting dye stains the chromatin in cellular nuclei blue.  It is because of the hematoxylin stain in an H&E that pathologists can differentiate different types of cells by their nuclei.  The ability to differentiate nuclear size, shape, and DNA patterns is paramount in the evaluation of cellular changes. The underlying mechanism behind why hematoyxlin stains the way it does is not fully understood, however, one theory suggests that the hematein-Al3+ complex binds to DNA, as supported by the fact that hematoxylin is prevented from staining nuclei when nuclear DNA is digested.  In addition, other uses in histology include staining of myelin, muscle, elastin, and neuroendocrine cells.  According to its material data sheet, the popularity of this stain is due to its “simplicity, ability to clearly demonstrate a wide variety of different tissue components, dependability, repeatability, and speed of use.”

Lisa Johnson stains slide with Hematoxylin and Eosin in the Kunkel Lab at U-M Department of Pathology. Video by Duston Johnston.Hematoxylin’s importance to Pathology cannot be overstated, and its history goes back to Robert Hooke describing hair and wool dyed with logwood in his 1665 book, Micrographica. This book also marked the beginning of the use of the microscope as a tool of scientific investigation and hence hematoxylin was present at the very beginning of microscopy.  Indeed Robert Hooke was the first to use the word cell. In 1865 Heinrich Waldeyer was the first person to use hematoxylin to stain human tissue, introducing staining techniques that are still in use today. The H&E stain has stood the test of time, and it is the standard for morphological stains used in essentially every Pathology lab in the world.

Even though hematoxylin is still used today to dye textiles and yarns organically, it is not as important in the textile world is it once was. However, this natural product will likely remain a mainstay on the shelves of Pathology labs for many years. Each time you look at a beautiful H&E stained slide, realize that even though hematoxylin is no longer the booty of pirates and the result of baymen labors, the birth of Belize and British Honduras and the quintessential pathology stain share a history rooted in the logwood tree. 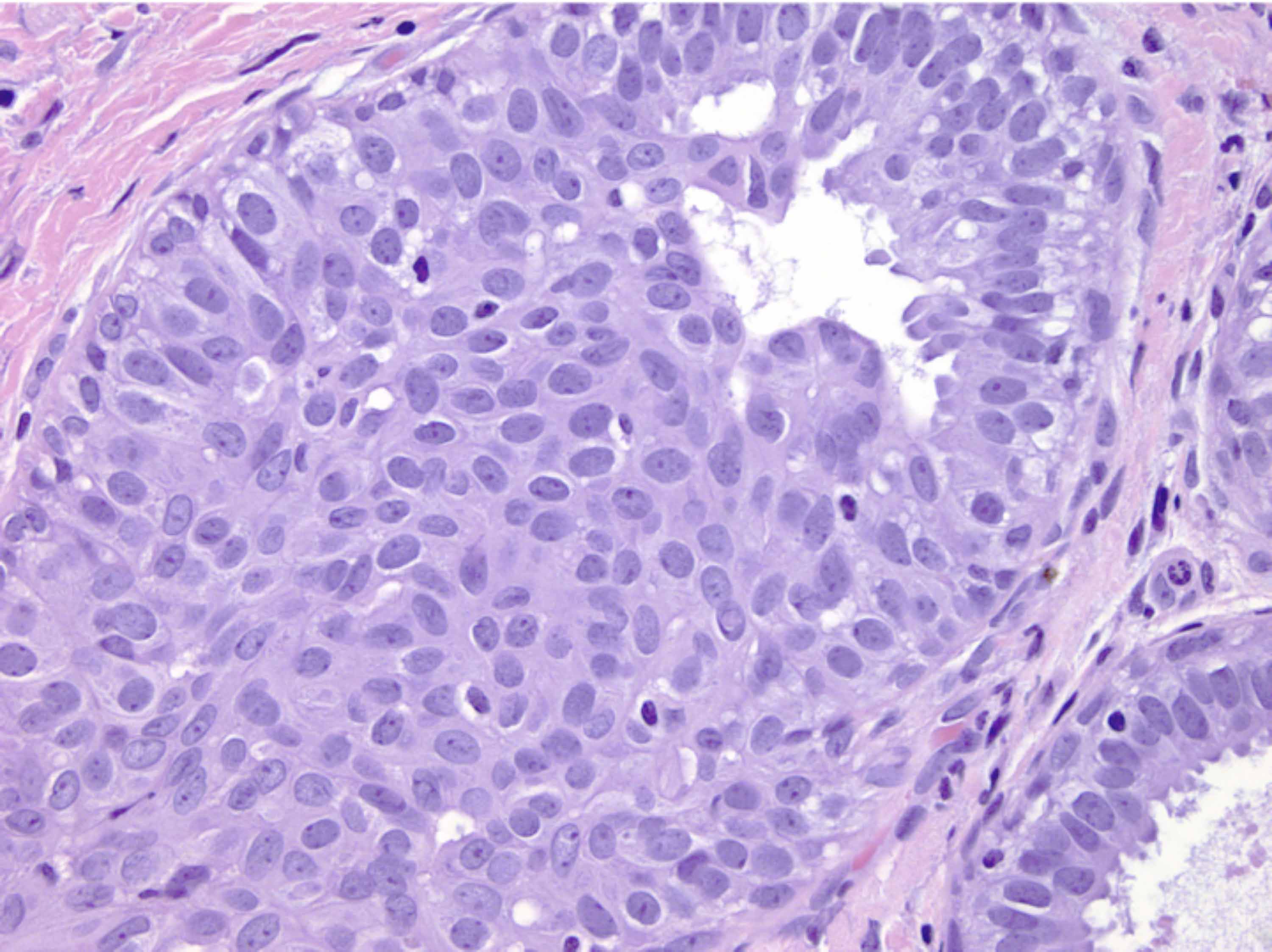 Usual ductal hyperplasia in the breast, stained with H&E. The purple nuclei are stained with hemaoxylin. Photo courtesy of Dr. Celina Kleer.Interesting facts about hematoxylin: