Mediators produced during inflammatory/immune responses dictate the type of response, as well as its magnitude ("quality and quantity"). The profile of cytokines and chemokines produced are responsible for the cell-to-cell communication that facilitates initial recognition of infection or damage.  These signals, in turn, communicate with primary lympoid tissues (the thymus and bone marrow) to mobilize inflammatory cells to the bloodstream.  At the tissue site, chemokines and orchestrate leukocyte adhesion to vascular endothelium, extravasation, and localization of leukocytes at the site of inflammation. Recruitment of leukocyte populations into inflamed tissues is initiated by cytokine-induced expression of adhesion molecules on vascular endothelium.   Chemokines promote the tight adherence of leukocytes to activated endothelium, as well as direct the extravasation of cells into inflamed tissue.  Chemokines further coordinate the response of inflammatory effector cells as they arrive in inflamed tissues.  The sequential activation and cellular recruitment cascades mediated by cytokines and chemokines are essential for successful resolution of infection or other tissue damage.  However, overproduction or dysregulation of these inflammatory mediators can also lead to destructive, pathological consequences. 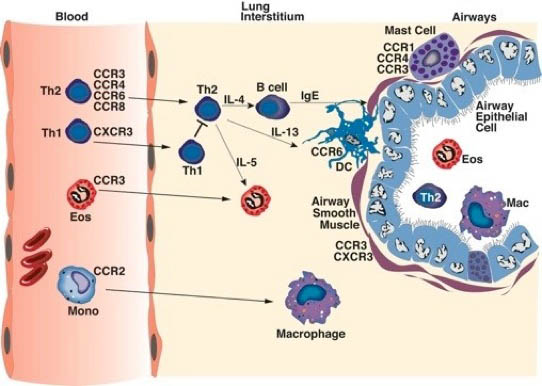 As depicted in the figure above, different cell populations express various and sometimes, specific chemokine receptors that help guide the leukocytes to specific diseased inflammation.  In the case as above during allergic airway responses, a Th2 environment produces specific chemokines that are induced by IL-4 and IL-13, such as CCL11 (eotaxin), CCL22 (TARC), CCL20, and CCL1.  These ligands bind to specific receptors, CCR3, CCR4, CCR6 and CCR8, respectively, that are found on Th2 cells and eosinophils that are known to be characteristic of an allergic type inflammation.   In contrast, cytokines that are associated with viral responses, including type I IFN and IFN gamma induced chemokines, such as CxCL9, CxCL10 and CCL5, which bind to CxCR3 and CCR1. These receptors are found on Th1 cells, Tcytotoxic cells, and NK cells, which are important for virus clearance. Thus, the cytokine/chemokine environment dictates that type of cells that accumulate at the site of inflammation based upon the expression of chemokine receptors found on the leukocyte surface.