SCF-induced mast cell generation and activation during allergen-induced airway responses has been identified as an important mechanism for promoting allergic responses by multiple investigators. Importantly, SCF and c-kit have been shown to be highly upregulated in airways of asthmatics as well as in nasal polyps in aspirin sensitive asthmatics and circulating levels of SCF have been correlated to the severity of asthmatic disease.  Investigators have also begun examining the role of SCF on eosinophil accumulation and activation.  In particular, the most recent studies have demonstrated that SCF mediates eosinophil-induced degranulation, cytokine production and survival.  In addition, using in vivo models of chronic allergen-induced responses results demonstrated that SCF was involved in driving Th2 cytokine production in the lung, as well as mucus overexpression and airway remodeling.  Together these studies were striking and suggested that SCF or its receptor may be an effective target for therapeutic intervention in the future. 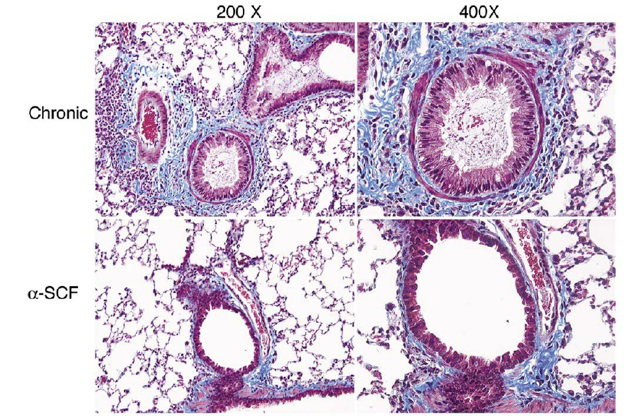 Figure Legend- The impact of blocking SCF has been convincingly illustrated using our chronic cockroach model of allergen induced remodeling. The trichrome (blue-green color) stained lungs designates the collagen deposition around the airway. The image above depicts the magnitude of inhibition facilitated by treated allergic mice with anti-SCF into the airway blocking not only inflammation and collagen deposition, but also mucus hyper-secretion.  This was also reflective in the measurement of airway hyperresponsiveness, which was nearly abrogated in allergic animals treated with anti-SCF.  (Berlin et al. 2006. Lab Invest. 86:557-565)

There appears to be overwhelming evidence that allergic asthmatic responses are driven by TH2 type responses characterized by the production of IL-4, IL-5 and IL-13.  The sources for the TH2 type cytokines include lymphocytes, mast cells, and eosinophils, all of which participate in the allergic responses.  The initial identification of predominantly TH2 type lymphocytes in the bronchoalveolar space in asthmatics, has led investigators to the realization that these cytokines (IL-4, IL-5, and IL-13) may play the predominant role in directing the leukocyte accumulation patterns and disease severity. Recent evidence has, however, suggested that additional cytokines participate in the initiation and maintenance of Th2 associated allergic responses.

IL-25 (IL-17E) is a member of the IL-17 family of cytokines and binds to a receptor, IL-17RB, that is shared with IL-17B.  Original studies on IL-25 demonstrated that it could directly induce Th2 cytokine responses when injected in vivo into naïve mice.  In these initial studies the results indicated that IL-25 predominantly induced Th2 cytokine in an antigen independent manner via a CD11b+/MHC class II+ cell population. Since the initial studies researchers have identified that IL-25 is induced during allergic and parasitic responses and that by using IL-25-/- mice or antibody inhibition, IL-25 has a significant role in the generation of severe airway inflammation.  The exact mechanism of how IL-25 induces enhanced Th2 responses has not been clearly identified.  However, IL-25 has been suggested to affect several cell populations.  The effect of IL-25 on T cells was recently demonstrated to enhance differentiation into Th2 type cells by promoting GATA3 expression as well as enhancing NFATc1 and JunB.  In addition, IL-25 may synergize with other important Th2 associated factors such as TSLP to further enhance the skewing of responses that would exacerbate the pathology in allergic disease.  In addition, the role of IL-25 for induction of Th2 cytokines has also been suggested to directly associate with non-T cell populations including mast cells, basophils, and eosinophils.  Interestingly, a recent study indicated that during parasitic infection a bone marrow-derived cell population was directly activated by IL-25 leading to Th2 type cytokine responses.  These latter studies identified a myeloid-derived cell that was not a T cell, mast cell or basophil.  This particular IL-25 responsive cell population increased in the bone marrow and subsequently was recruited to the site of Th2 inflammation.  Furthermore, a recent study demonstrated that during persistent viral infection a CD11b+ macrophage population produced IL-13 in a CD1-dependent mechanism.  A recent publication has outlined the role of IL-25 for direct induction of Th2 cytokines when instilled into the lungs of naïve mice by blocking the responses using an IL-25R blocking antibody. Thus, a non-T cell source of Th2 cytokines may also act to enhance allergic inflammation. We found the in our model of allergic airway inflammation that IL-25 expression levels were directly linked to the SCF/c-kit responses described above (see figure below).  This novel area may help explain how chronic asthmatics continue to have significant problems in the face of immune modulatory treatment protocols directed at T cell responsiveness.  Our lab is presently further exploring the role of SCF and IL-25 in the generation of chronic airway responses.

Figure Legend: The inhibition of SCF during allergic airway responses significantly reduced Th2 cytokine responses in lungs of chronically challenged mice (left), which was not due to altered T lymphocyte responses. However, the decreased Th2 cytokine responses were due to reduction in IL-25 from SCF activated eosinophils and linked to a reduced accumulation of CD11b+ Th2 cytokine producing myeloid cells. (Dolgachev et al. , J. Immunol. 183:5705-15)