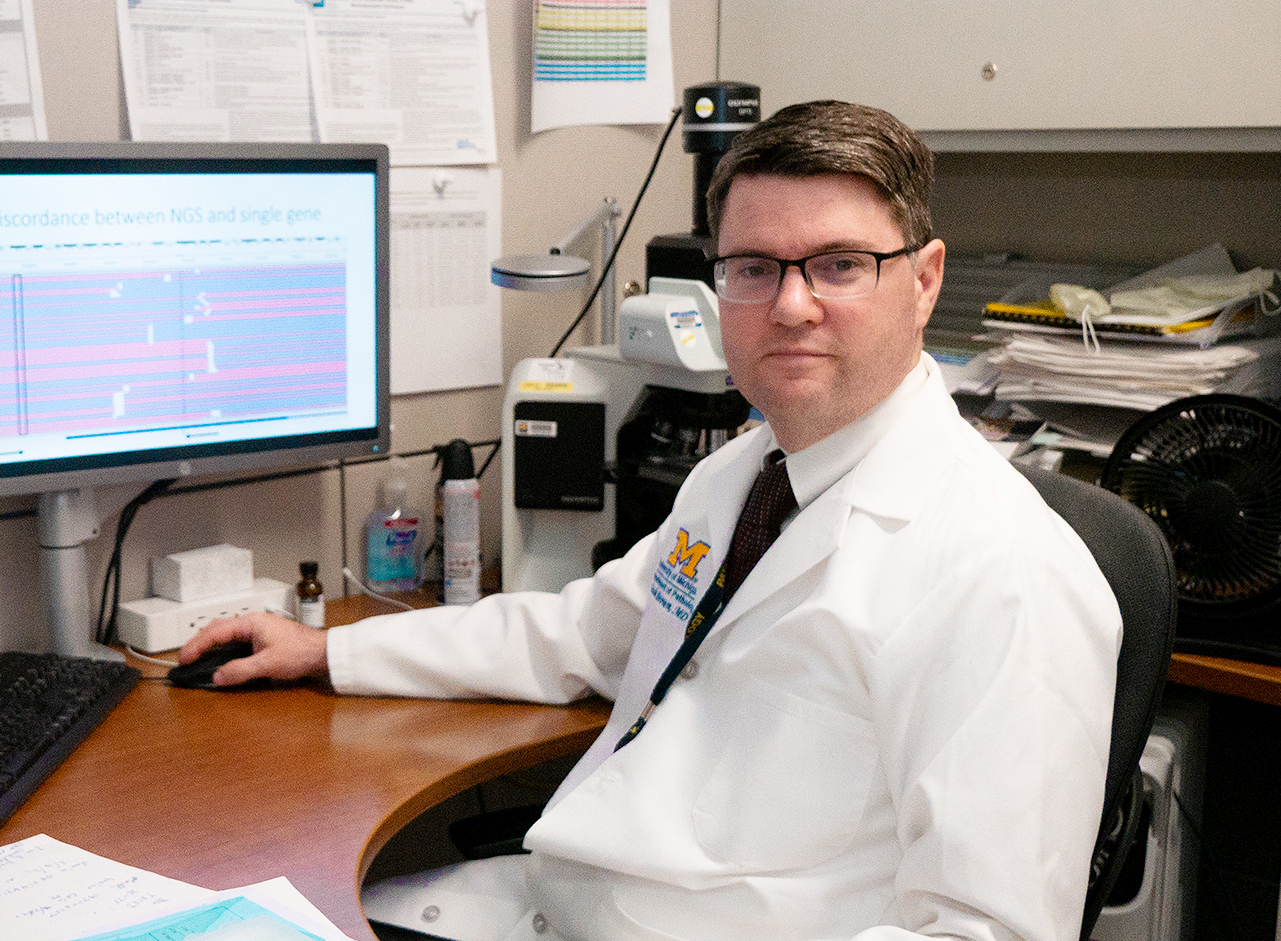 The Human Genome Project, which was tasked with sequencing the entire human genome took 13 years and about $5 billion dollars (in today’s dollars) to complete. “15 years later, a human genome could be sequenced in a few days at a cost of about $500 due to the development of next-generation sequencing (NGS). That is equivalent to purchasing a car for $30,000 and, 15 years later, only paying a third of a cent,” explained Noah Brown, MD, Director of Molecular Diagnostic Laboratory and Associate Professor of Pathology. “This explosion of sequencing capability is dramatically affecting how medicine is practiced, based on both germline (hereditary) molecular alterations and somatic, i.e. those acquired within cancers.”

Brown was raised in Pontiac, Michigan, and completed his undergraduate degree at Stanford University in California. Along the way, he became a paramedic and served on ambulances during college and medical school. His plan was to go into Emergency Medicine. But in medical school, he became fascinated with the underlying mechanisms of disease. He recalls attending a multidisciplinary tumor board beginning with an internal medicine physician giving the patient’s history and physical exam findings and ending with a broad “differential diagnosis.” The radiologist then described the anatomical characteristics of the disease process based on various imagining studies leading to a refined “differential diagnosis.” The pathologist then used a microscope to show what was happening at the cellular level and rendered a precise and definitive diagnosis (not a “differential diagnosis”). “I was really attracted to the underlying science of disease and the definitiveness of pathology relative to other areas of medicine.” After medical school at the University of Michigan, Brown stayed at Michigan and completed residency training in both Anatomic and Clinical Pathology followed by fellowships in Hematopathology and Molecular Genetic Pathology. He subsequently joined the faculty in the Department of Pathology at Michigan Medicine. “I guess I am a Michigan guy!”

Dr. Brown now spends about 8 weeks/year on the hematopathology service, diagnosing leukemias, lymphomas, and other hematolymphoid diseases. However, most of his effort is devoted to serving as the Director of the Molecular Diagnostics Laboratory, where he leads a laboratory at Michigan Medicine performing DNA- and RNA-based testing, primarily for applications in cancer. With the explosion of molecular oncology testing applications, Dr. Brown has led this lab to bring on dozens of new tests, ensuring the laboratory continues to evolve with scientific advances. Molecular testing in cancer is challenging because it requires looking for somatic mutations – that is, those acquired within cancer or “neoplastic” cells. “Within a biopsy or other specimen collected for molecular testing, there is a mixture of neoplastic and non-neoplastic cells. Within the neoplastic cells, there can even be subclonal populations. Therefore, molecular testing in oncology requires looking for molecular alterations at a much lower level than is required to look for germline (inherited) molecular alterations.” Dr. Brown continues, “Molecular oncology testing enables us to understand cancer even beyond what is known from looking at the cells as the pathologist showed at that multidisciplinary tumor board. It enables us to know what makes cancer by identifying the specific molecular alterations within those cells that caused them to become cancer and grow.” According to Dr. Brown, molecular data are progressively being incorporated into pathology diagnoses. “In an increasing number of areas, molecular data enables the pathologist to render a more precise diagnosis that more accurately predicts how cancer will behave and the patient’s prognosis.” This special knowledge of exactly what molecular alterations are driving a particular patient’s cancer, in turn, also allows us to design therapies that specifically target those alterations. “For example, we may find an EGFR mutation in a lung cancer that turns a protein that normally fluctuates from being turned ‘on’ or ‘off’ by the body, to being turned permanently 'on’ (also known as constitutively activated) by the mutation. Knowing that this mutation is driving the patient’s cancer allows us to treat the patient with a medication that inhibits this abnormal protein caused by the mutation. This type of ‘targeted’ or ‘personalized’ therapy is much more effective and has a lower side-effect profile than standard treatments likely chemotherapy. This type of targeted/personalized approach to the treatment of cancer is the present and future of cancer treatment.” Dr. Brown also points out that “highly sensitive molecular tests for disease-defining molecular alterations can also be used to monitor patients for very low levels of residual disease to enable much earlier management of patients whose disease recurs.” 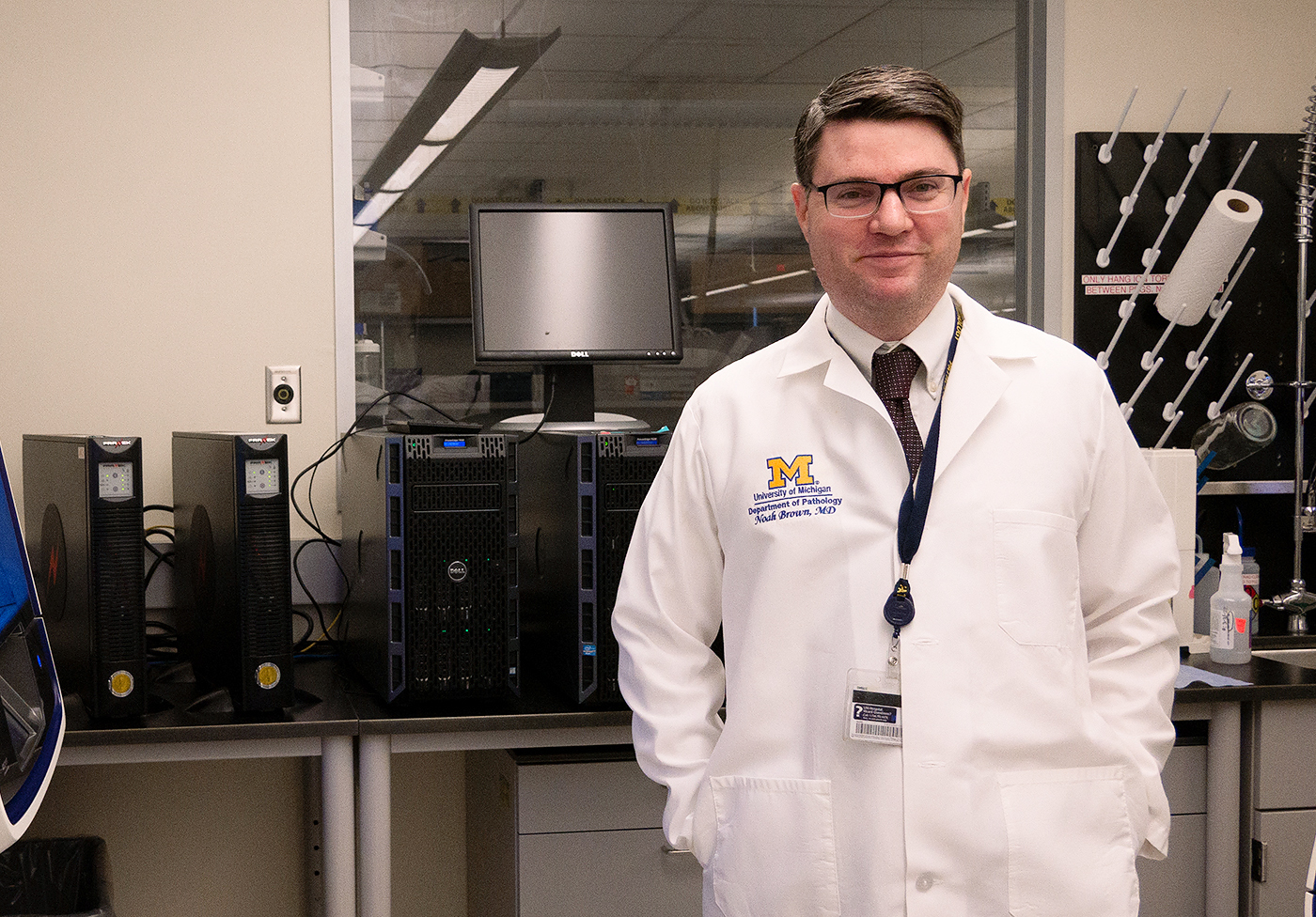 Today, pathology residents have rotations through the molecular pathology laboratories in order to interpret molecular data and understand the impact of molecular findings on a growing proportion of patients. The need for molecular pathology specialists continues to grow as well, fueling the need for residents choosing to pursue fellowship training in Molecular Genetic Pathology. Dr. Brown advises that molecular pathology is a great field for anyone wanting “to be a lifelong learner. Molecular pathology is one of the fastest-growing areas of medicine, so you must really enjoy learning and evolving over time.” Dr. Brown compares the pace of change in this field to the pace of publishing. “By the time a book on molecular pathology is written, edited, and printed, much of it is outdated. The field is moving too quickly to even be able to learn from a textbook.” This rapid pace of change also relates to one of the chief challenges facing the field, namely test reimbursement. The field is changing so quickly that insurance companies are often unable to keep up with these advances. Molecular pathologists often have to work with insurance company medical directors to advise them on the clinical utility of new testing that is relevant in this field.

Overall, Dr. Brown describes the field as challenging but fulfilling. “It is exciting to discover a new molecular alteration that is the driver behind a cancer and to know that this can be incorporated into how things are diagnosed and treated. I also find it very rewarding to stay on the leading edge of this quickly evolving area of medicine in order to deliver the best possible patient care.”