The Vietnam War prevented Philip Giesen from completing his pathology residency at U-M, but his love of the University never ceased. Now, it’s supporting recognition of resident-led research. 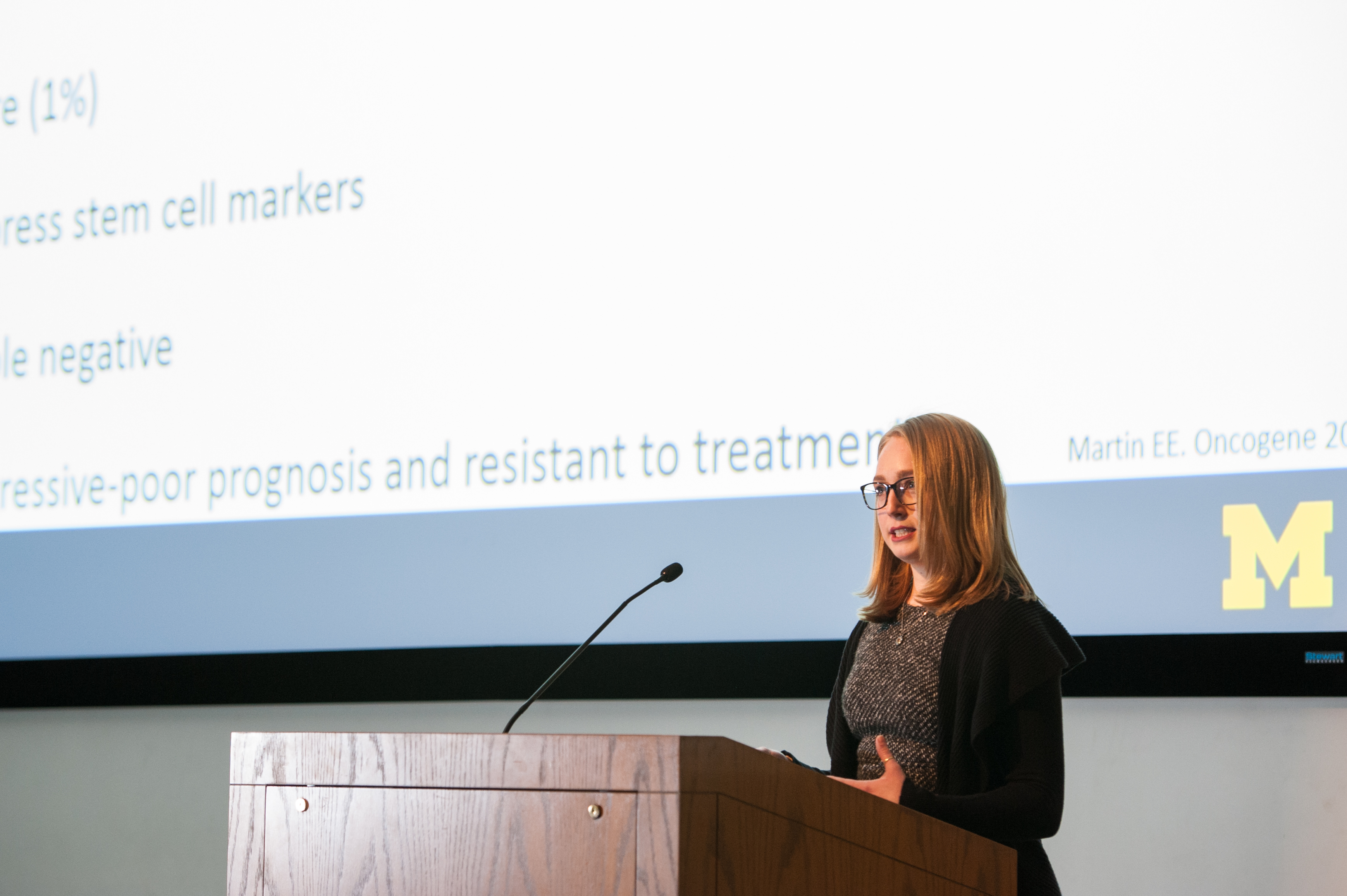 Dr. Emily McMullen, the recipient of the 2018 Giesen Award and Lecture, speaks on the breast cancer research she's done in the lab of Celina Kleer, MD.  Philip Giesen followed in the footsteps of his father and several uncles who attended The University of Michigan and became physicians. He originally attended U-M to play football. However, upon receipt of his six-week grades (all Cs and Ds), it was clear that playing football and taking a class load that would lead to a career in medicine wasn’t going to work for him. He graduated from The University with a BS in psychology and enrolled in The St. Louis University School of Medicine.

While Giesen recalls being an average student, who happened to do really well on the Medical College Admission Test, the leadership at St. Louis had glowing recommendations for him when he applied to his residency at U-M. Henry Pinkerton, MD, who was a professor and Director Emeritus wrote in a letter to Pathology Chair, Dr. A. James French that “I have come to know Mr. Giesen quite well and he is decidedly one of our best students,” adding that “ his personality is sound and pleasant and I have no hesitation in recommending him.” That confidence was echoed in a letter from Assistant Dean, Richard J. Dames, MD, who wrote that “Mr. Giesen’s performance, academically, has been definitely superior. He impresses one as being an extremely bright individual and apparently has his long-range goals fairly well thought out.”

Giesen was accepted at U-M and began as a straight pathology intern (a new concept at the time) in July of 1966. He jumped into research projects writing two papers with Dr. John Batsakis – one on lipoprotein electrophoresis and one on LDH isoenzymes. He also gained an interest in cytopathology, inspired by Dr. Bernard Naylor. Unfortunately, Giesen’s time at U-M was cut short when he was drafted into the United States Medical Corps. He applied to finish his residency training at Madigan Hospital at Fort Lewis, Tacoma, Washington and, with Dr. French’s assistance, was accepted. At the time, French wrote in a letter to Major Dudley C. Miller, who worked in personnel and training in the Medical Corps Department of the Army, and Office of the Surgeon General, that Giesen was a “partially trained but brilliant young pathologist” and that he “would match him, after two years of training, with the average resident at the end of three or even four years of training.”

Upon the completion of his residency, Giesen stayed on as Director of Anatomic Pathology for a time before accepting a position at Borgess Medical Center in Kalamazoo in 1974.  There, he ran microbiology, did and taught surgical pathology, and in 1986, was selected as the Medical Laboratory Director, a role he filled until he retired in 2001.

In the 1970s, the Don Robinson Insurance Agency in Ann Arbor offered some U-M perks with the purchase of a whole life policy of $25,000 – $35,000, with the University named as the beneficiary. Enticed by a membership to the President’s Club, a parking sticker for use in town, and other benefits, Giesen purchased a policy. He continued paying the premiums, but didn’t give it too much thought until about five years ago when he was contacted by someone in the U-M development office requesting the cash value of the policy.  As a donor, the University of Michigan encouraged Geisen to direct how the money would be used. Giesen determined the funds should be used to support resident-driven research projects.

Vice Chair for Faculty Affairs, Dr. Kathleen Cho, was the interim chair at the time and worked with a group of other leaders, including Vice Chair of Clinical Affairs and Quality, Dr. Jeffrey Myers, who was then the Director of Anatomic Pathology. Myers was organizing an annual research day highlighting the work being done by the department’s trainees and faculty. The consensus was that the Philip Giesen Award and Lecture be established. Cho explains, “We ultimately decided that it would make more sense to apply the funds to an annual Giesen award for research done by trainees, rather than fund the research itself, since more of our trainees could benefit this way and we could acknowledge Dr. Giesen’s generosity on a recurrent rather than one-time basis.” The award is now given annually to the best abstract presented by a resident at what has been renamed the CHAMP (or Clinical, Hemato-, Anatomic, and Molecular Pathology) Research Day.

The inaugural recipient of the award was Dr. Mark J. Kiel, for his talk Integrated Genome Sequencing Reveals Frequent Loss of Function Alterations of ARID1A and Other Epigenetic Modifiers in Sezary Syndrome, given in 2015. This year, Dr. Emily McMullen became the first female, in a female mentor’s lab, to receive the award. McMullen, who is entering her third year of residency, has been working on metaplastic breast carcinoma in Dr. Celina Kleer’s lab since she began her training, and gave the talk, Metaplastic Breast Carcinomas Exhibit Low CCN6 Expression with Activation of the IGF2BP2-HMGA2-Signaling Axis. She hopes to pursue an academic career with research as an integral part of her practice. “All of us (in the lab) were excited. The award helped validate my work, and has inspired me to further my research goals,” McMullen says. 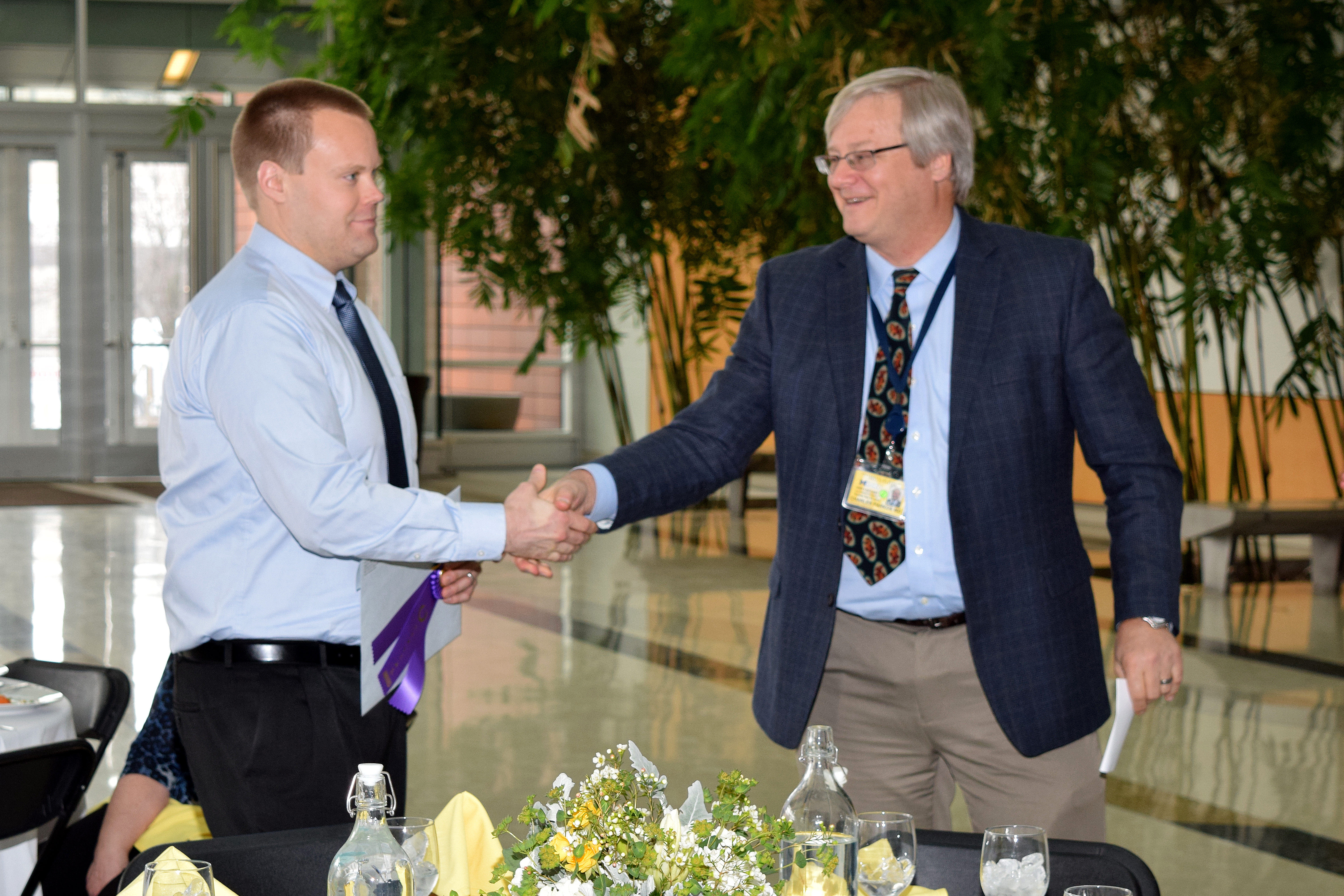 Aaron Udager receiving the Giesen Award from Department Chair, Charles Parkos, MD, PhD (2016).Aaron Udager, who now serves as an assistant professor and received the award for his prostate cancer research in 2016, says that it is often difficult to balance the competing demands of clinical service and research. However, he was encouraged by the support he received from his research mentor, Dr. Rohit Mehra, the Michigan Center for Translational Pathology, and the Department as a whole, during his residency. “For me, the Giesen Award is a generous reminder of the Department’s ongoing commitment to support pathology trainee research,” he says.

As for Giesen, he’s enjoying his retirement in Naples, Florida where he golfs three times a week and enjoys running and lifting weights on the days he doesn’t golf. Nearly every night, he retreats for a soak in his hot tub, martini in hand, to read the Journal of the American Medical Association. “I said do something for residents. Whomever thought of the award did a good thing. I never dreamed it would have my name attached to it.”

Do you want to help support pathology trainees or give a gift benefitting in some other way? Contact Jason Keech, Assistant Director of Development, at jkeech@umich.edu or visit http://giving.medicine.umich.edu/areas-to-support/pathology to give directly or learn more.