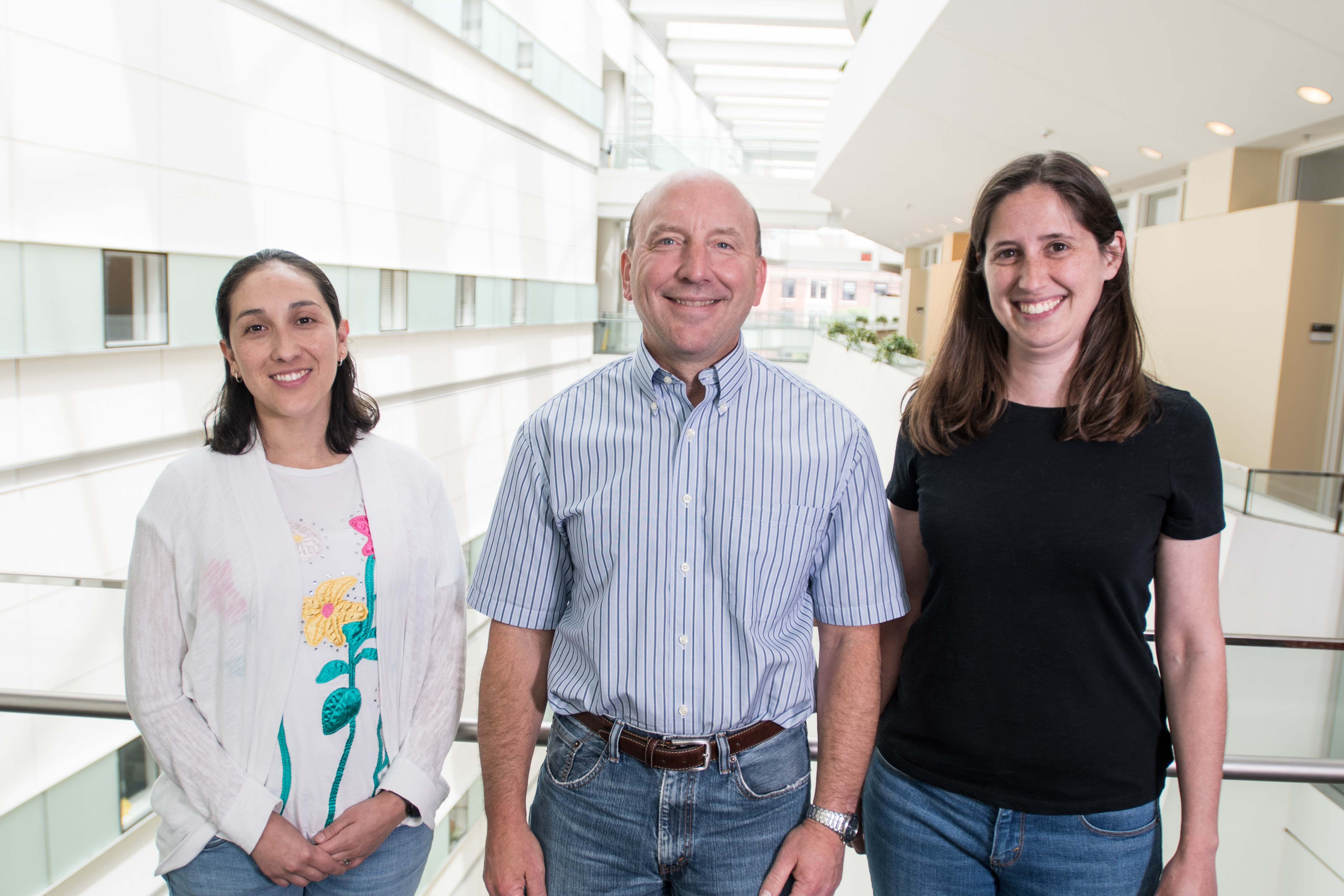 Fonseca Aguilar, Lukacs, and Ptaschinski. Photo by Dustin JohnstonCongratulations to Dr. Nick Lukacs, the Godfrey D. Stobbe Professor of Pathology, Assistant Dean for Faculty Affairs, and the Scientific Director of the Mary H. Weiser Food Allergy Center, for his nomination and selection for the 2018 MICHR Distinguished Mentorship Award!

Lukacs was nominated by his trainees and peers at the U-M Medical School for his outstanding leadership and mentorship.  This Mentor Award was established to recognize and celebrate the efforts and accomplishments of faculty who demonstrate consistent, high quality mentoring in areas of clinical and translational research.

While award nominations must be submitted by one person, Lukacs’ entire lab signed the letter of nomination in which they stated, “Dr. Lukacs has mastered the challenging balance between guiding trainees carefully through their projects, and simultaneously instilling a sense of autonomy and personal ownership over their research.  He is instrumental in assisting members of his lab to set up new projects, is attuned to their progress and is always ready to provide direction and support; just as importantly, he knows when to step back and allow lab members to work independently.  Through this remarkable guidance and mentorship, lab members at all professional levels are able to contribute meaningfully to research and progress within their careers.”

Lukacs is also considered one of the most supportive PIs for scientists who need to find balance between their careers and their family obligations. “In his lab and office, you can see his determination to support women; 80% of his mentees and lab members are women, ranging from undergraduates to research investigator,” stated Wendy Fonseca Aguilar, a foreign Post-doctoral Fellow who gratefully recognized the opportunity she received by being able to join the Lukacs Lab.  Wendy, along with Catherine Ptaschinski, a Research Investigator in the lab, spearheaded the nomination efforts on behalf of Lukacs.  Carrie-Anne Malinczak, a Ph.D. student in his laboratory wrote in support of his nomination, “Dr. Lukacs is significant in offering an academic environment where mothers and parents, in general, are able to succeed.  As a parent with many responsibilities outside the lab, I would not be able to pursue this degree without his unwavering support.”

Dr. Charles Parkos, the Carl V. Weller Professor and Chair of Pathology, praised Lukacs, stating, “Nick cares deeply about all aspects of mentoring.  In the last 20 years as a faculty member at the University of Michigan, he has mentored nearly 50 individuals including undergraduate and graduate students, postdoctoral fellows, and clinical allergy fellows. Dr. Lukacs is a PI or Co-Investigator on three T32 training grants at U-M and he makes time to meet regularly with each trainee in his laboratory, not only to direct research, but also to discuss future career plans. Additionally, he has mentored a number of M.D/Ph.D. students, thus training several physician/scientists with a focus on translational research. Finally, he has provided support for many underrepresented minority scientists, as well as creating a welcoming environment for women scientists and clinicians as they strive to balance work and family life.”

“We were very much impressed by the packet that you submitted for Professor Lukacs,” stated Dr. Vicki Ellingrod, Associate Director for MICHR. “He is clearly held in high esteem by his peers and mentees, and the letters highlighted both his mentoring capabilities and his successful track record. This award will formally recognize what you and Professor Lukacs’ peers and mentees have already realized and appreciated.”

Please join us in congratulating Dr. Nick Lukacs on this well-deserved recognition of his service to Pathology and the U-M Medical School community!