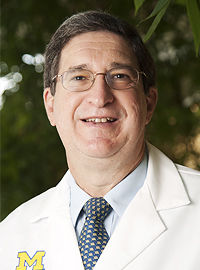 Giacherio held multiple leadership positions in the Department over his tenure, including Director of Academic Programs (1997-2002), Director of the General Chemistry Laboratory (1985-2002), Director of Point of Care Testing (1993-2015), Director of Chemical Pathology (1993-2020), Director of Laboratories for East Ann Arbor, Brighton Health Center, and Plymouth-Canton Health Center (1995-2015), and Director of Specimen Processing (2011-2020).  Giacherio has a long history of ongoing service, both within the Department and externally. He served in multiple leadership roles at the American Association for Clinical Chemistry from 1989 through 2018.  His list of service roles within the Department is too long to list, but a few more recent areas of service include the Pathology Relocation and Renovation Committee, House Officer Clinical Competency Committee, Clinical Pathology Operations Committee, Chest Pain Pathway Redesign Committee, Quality Assurance Committee and, most recently, the COVID-19 Serology Testing Working Group.

“Don was a tremendous asset to the Department of Pathology and the clinical enterprise.  He will be sorely missed for his expertise, experience, and genuinely kind nature,” Valdez said.

In his retirement, Giacherio looks forward to spending more time with his family and completing his bucket list of goals he has put off too long. We thank Dr. Giacherio for his many years of service and wish him all the best in his retirement!