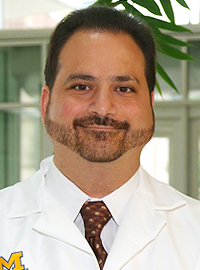 Balis had a rather circuitous route to pathology informatics. He began his career as a computer engineer prior to medical school. In medical school, he discovered pathology and completed AP/CP residency training, followed by two back-to-back 2-year research fellowships in bioinformatics and tissue engineering at Harvard’s Center for Engineering in Medicine. Subsequently, he worked as a gastrointestinal pathologist with added effort in pathology Informatics at Massachusetts General Hospital. While at MGH, “I identified tremendous opportunities in pathology informatics for using automation and computational methods for improving productivity and enhancing patient safety, imaging, and research,” recounts Balis. “In 2006, Bruce Friedman was retiring and recruited me to Michigan where I have been ever since.” Balis leads the department as well as conducts research in the areas of automation and workflow, machine learning, and image analysis. 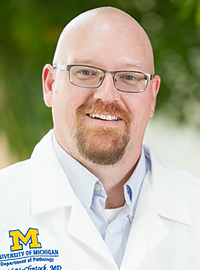 McClintock’s interest in pathology informatics began in his residency. “Pathology is a big producer of data,” he explained. “Laboratories were doing quality improvement initiatives from a lab perspective, but not a data perspective. I could see that there were many opportunities to improve our processes to provide the right information to the right person at the right time and in the right way.” McClintock joined the faculty at the University of Chicago and was then recruited to Michigan, where he focuses on operational informatics. 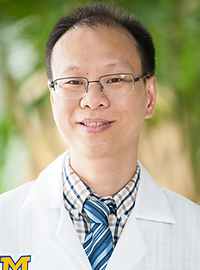 As an 8-year-old child, Cheng was already writing programming code. When he went to medical school, a part of him was sad that he was not going to be able to use his skills as a programmer. As he was looking at hematopathology fellowship programs, he came across Michigan’s pathology informatics fellowship and his interest was piqued. He was fascinated by “the convergence of computers, medicine, and pathology. Informatics can solve a lot of pathology-related problems through workflow changes, computer programming using machine learning, and other types of data analytics.” Cheng joined Pathology’s PI fellowship program, following which he joined the division’s faculty. Cheng is an expert programmer whose expertise encompasses data mining, machine learning, image analysis, natural language processing, and deep learning, which includes convolutional neural networks and generative adversarial networks (GANs). If you have never heard of GANs, these create two machine learning pipelines that challenge each other, one generator and one critique. The generator builds an image and tries to fool the critique pipeline into believing it is a real image, not a constructed one. “This has some interesting uses in Pathology,” stated Cheng.

Pathology informatics encompasses such a broad spectrum that there is not one unique skill set that is needed. In the operational support area, you, of course, need to have strong information technology skills. “The most difficult challenge in running operations, however, is the human resources management component,” stated Balis. “Although not in the name, it is very much involved in the operational stewardship of the resources under its purview and requires exceptionally good management skills. When we were recruiting another member of the team, Dave [McClintock] was the optimal candidate because he has better operational skills than probably anyone else in the field.” McClintock added that people should not be afraid of informatics. “If you really look at it, informatics is the study of information. If you are someone who has an interest in how to get information to the right people and how to use that information appropriately, you can be a part of informatics committees and initiatives without having formal training in IT.  One of the biggest skills needed is a real interest in learning more about how pathology data, information, and knowledge is used. PI touches all areas of the lab. There are few projects that don’t touch IT or don’t require an informatics component; it has become so pervasive. Any training that you get in medicine can apply. It is just taking the next step in looking at how that data is produced and handled.”

At Michigan, the PI division is a full-featured informatics division. “We have substantial development capability which many units in the hospital do not and many large academic pathology departments in the nation don’t have,” Balis proudly stated.  This enables the division to develop new applications to serve the missions of the institution more effectively when commercial options are not available.  One example of this is the PathTrack specimen tracking program. “The programmers did an awesome job,” stated McClintock. “But we had labs, the division of quality and health information, managers like Amy Harrison and Jeff Lott, along with PI teams including Josh Jacques, Brian Royer, and Bill Hubbard, who all came together into a very cohesive effort to create PathTrack.” Once the specifications were defined by the users, the PI team was able to develop a sophisticated program to track specimens from offsite locations through the entire chain of custody. “PathTrack is a commercial-grade package with an uptime approaching 99.999%. It is a very robust, mission-critical application,” stated Balis. “Of course, I am biased, but our division is one of the best PI divisions in the country, and I have visited many places. We are fortunate to have the division that we have.”

“Pathology as a specialty is unique,” said Balis. “The product of many other specialties is service rendered directly to patients. The product of pathology and laboratory medicine is primarily raw data and knowledge, which, if we can, we convert to wisdom. With the exception of transfusion medicine and perhaps immunology, we don’t serve patients directly. We generate information…Once you have generated your data, how do you get it to where it can do the most good? The greatest challenge is ensuring that your data has been registered by the person that ordered it and that person knows what to do with it. The goal of post-modern informatics is to not just generate the information but to validate that it has been acted upon to the greatest effect. Closing the loop.”

"The goal of post-modern informatics is to not just generate the information but to validate that it has been acted upon to the greatest effect. Closing the loop.”

For those who are considering a career, pathology informatics fellowships provide many diverse opportunities, depending upon one’s skill set and interest. According to Balis, information sciences are in a renaissance period and pathology informatics is right in the center of it. “The field is more interesting, more exciting than ever before. This may be viewed as the golden era of PI with explosive growth in machine learning tools and methodologies for controlling, measuring, and converting data to actionable wisdom. This is the best possible time for informatics.” In addition, the field of clinical informatics, of which pathology informatics is a subspecialty, offers board certification. Balis and McClintock currently serve on the clinical informatics board examination committee and Balis also serves on the longitudinal assessment program committee for clinical informatics. Board certification ensures clinical informatics will remain a distinct professional vocational subspecialty in medicine. “A career in PI doesn’t mean that you need to be 100% informatics,” adds McClintock. “You can have an interest in PI and still have a full career in pathology itself. And it isn’t just for physicians. Many of our analysts were lab techs or other techs who were interested in the data and systems side. Lab expertise comes in handy and can help you to optimize workflows in different ways.” “There are books, journals, and conferences on pathology informatics where you can get more information on the field,” Cheng added. “This will give you a better idea of what is involved.”

As a service field, solving problems and improving processes give great joy to the PI faculty and staff. “I still do some programming and when I build something and see people using it and driving enhancements in efficiency or discovery, it gives me great professional satisfaction,” states Balis. “Sometimes I spend months working on a problem.  When I am able to solve it, people are very thankful and that makes me feel good,” says Cheng. McClintock added, “I get joy from being able to provide optimized solutions and seeing people happy and satisfied with those solutions.” The division is a close-knit group that consistently works together on projects. While the workload can be intense at times, the faculty and staff enjoy each other’s company. Balis concluded, “It is great to be part of a wonderful team, a family. Prior to COVID, we would do things together socially as well as what we do at work. It is a very cohesive unit. The magic of our success is that we work well together as a team.”