Dr. Peter Ward, Active Emeritus Professor and former Chair of Pathology, was named “World Expert in Sepsis” by Expertscape on World Sepsis Day, September 13, 2021. To be named a World Expert, one must be in the top 0.1% of scholars writing about Sepsis over the past ten years. Ward came in among the top .006% of scholars in the world and the number 1 scholar on sepsis at the University of Michigan. 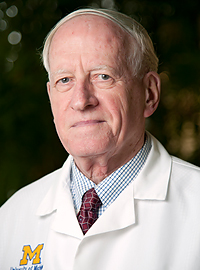 Ward served as the Chair of Pathology at Michigan Medicine from 1980 – 2005 and has been engaged in research since his medical school days, with his first peer-reviewed, 1st author manuscript published in 1959. He has since published more than 700 manuscripts in peer-reviewed literature, primarily focused on the role of complement and inflammation in sepsis.  In addition, he has written 227 book chapters and authored 7 books in the field.

Please join us in congratulating Dr. Peter Ward on this outstanding recognition!