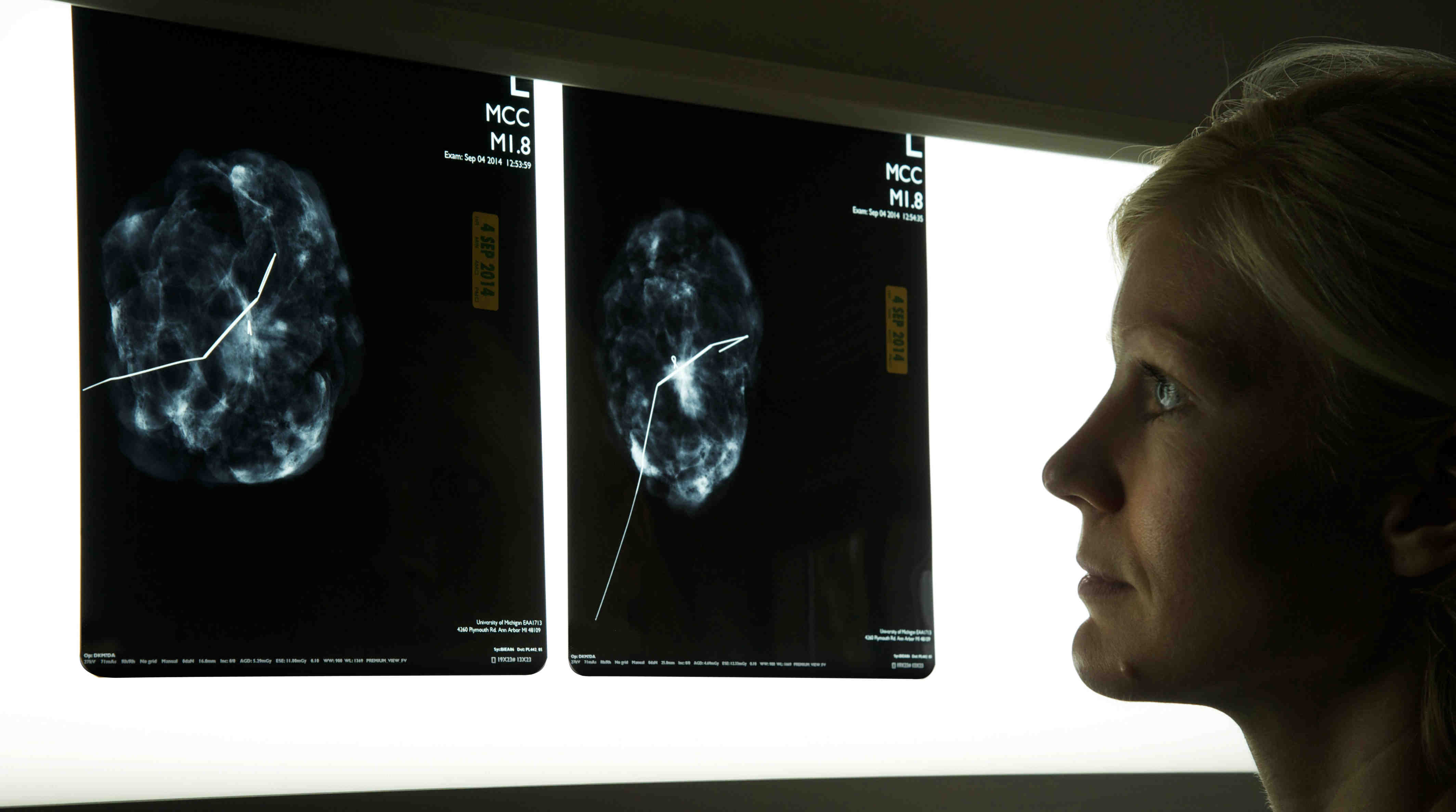 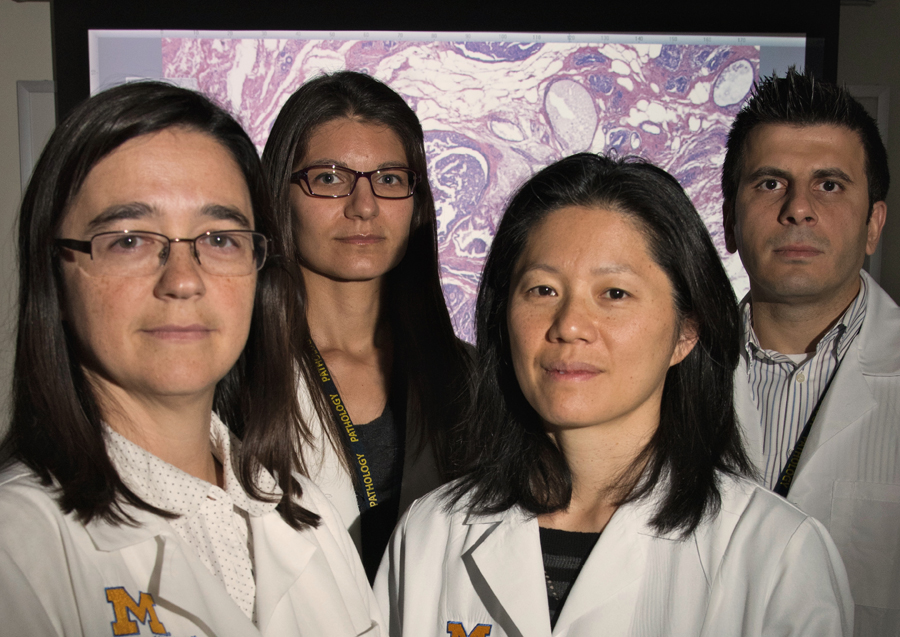 Group photo of a portion of the breast team (left to right) Drs. Celina Kleer, Laura Walters, Judy Pang, Ghassan Allo In 2008, the Division of Surgical Oncology moved outpatient breast surgeries offsite from the University Hospital (UH) to East Ann Arbor Ambulatory Surgery Center (EAA), about 5.5 miles away. While EAA had six operating rooms, there was no surgical pathology lab on-site. Specimens removed during surgery had to be transported to UH by courier at the end of each day. Not only were the specimens late to arrive in Pathology, they were often mislabeled and not in adequate formalin. As a result, the turn around time for pathology reports was increased by at least a day. Knowing that a delay in results would negatively impact patient care, a team of UH physicians and administrators, led by Director of Anatomic Pathology, Dr. Jeff Myers, came together to find a solution. In February, that solution resulted in the East Ann Arbor Intraoperative Breast Cancer Management Practice receiving the award for 2013 Clinical Services Program of the Year.

From the beginning, the team was faced with a choice. “Do we want a lab that is a triage lab or do we want to have a practice of excellence and do something that is above and beyond what most places do?” recalled Julie Jorns, Clinical Assistant Professor of Pathology, who was the breast pathology fellow at the time. When the topic was raised at an Anatomic Pathology Operations meeting, a decision was made. Pathology’s Administrative Director, Marty Lawlor, would bid for laboratory space at EAA and the goal would be for pathologists, pathology assistants, and histology technicians to work side by side with the surgeons to offer the ultimate in patient care. They would perform frozen sections of breast tissue allowing for real time evaluations of tumor margins.

“They would perform frozen sections of breast tissue allowing for real time evaluations of tumor margins.” 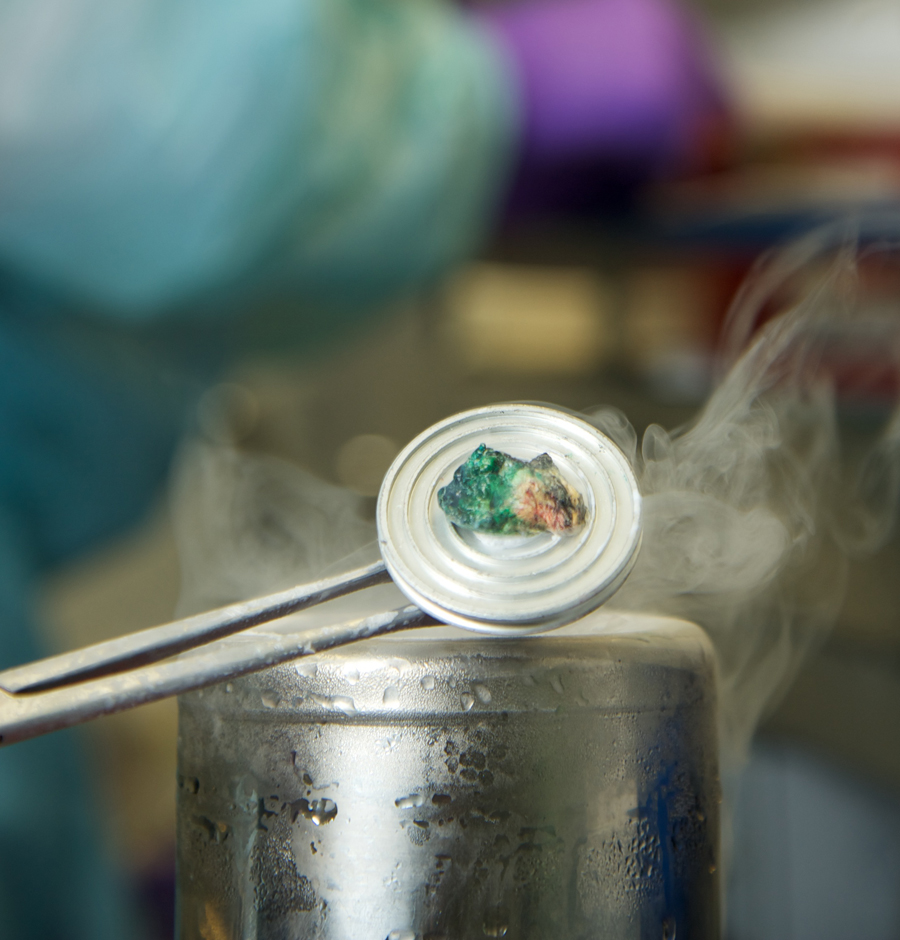 Frozen Sample“Mainly, if you talk to anyone in pathology around the world, they would tell you they never do frozen sections of breast tissue. It can’t be done. The integrity of the tissue can’t be kept intact to assess margins because fat’s squishy, and if you ever could do it, it’s a very long and arduous process”, said Christine Rigney, Assistant Administrator of Operations.

The faculty and staff were intimidated, scared even, by the idea of performing frozen sections on breast tissue. However, they knew that if there was a way to figure out if tumor margins were clear in real time, with the patient still on the operating table, it would result in a decreased reexcision rate and a decrease in patient morbidity, inconvenience, and cost to the patient.

In order to maintain safety for the patients, the process for freezing, cutting, staining, and reading up to seven blocks of tissue would have to be fast, under 20 minutes. In August 2009, with only a week until the lab was set to open, Pathology Assistant Tiffany Vail and Histology Tech Misty Wideman were given the task of developing a procedure for freezing the tissue. They had to work intensely to come up with a workable solution. “We thought of the way we freeze muscle tissue in Immunohistochemistry using liquid nitrogen and isopentane, but freezing with both liquid nitrogen and isopentane takes too long. Through trial and error, we discovered that you could dip tissue directly into liquid nitrogen, cut it at 20 microns (6-7 is normal), and still get readable results,” Wideman said. “We’re still using the same method. We’re better at cutting tissue now. I think close proximity and being able to communicate what the surgeons need and what their expectations are has contributed to better care for patients.”

“We were all afraid of doing these frozens at first...we’re not afraid of them at all anymore.”

Not only were the results readable, they resulted in the reoperation rate for breast patients being reduced from 55.3% to 19.3%. Michael Sabel, Associate Professor of Surgery, expressed “It’s just been a boon for patients; and from a surgical point of view, I don’t have to go wider or err on the sides of taking wider margins because I can get my lesion out, see what the pathologist says and go from there. Having less close margins results in less radiation and better cosmetic results down the road from that initial operative experience.”

“We were all afraid of doing these frozens at first,” Jorns said. “We’re not afraid of them at all anymore.”