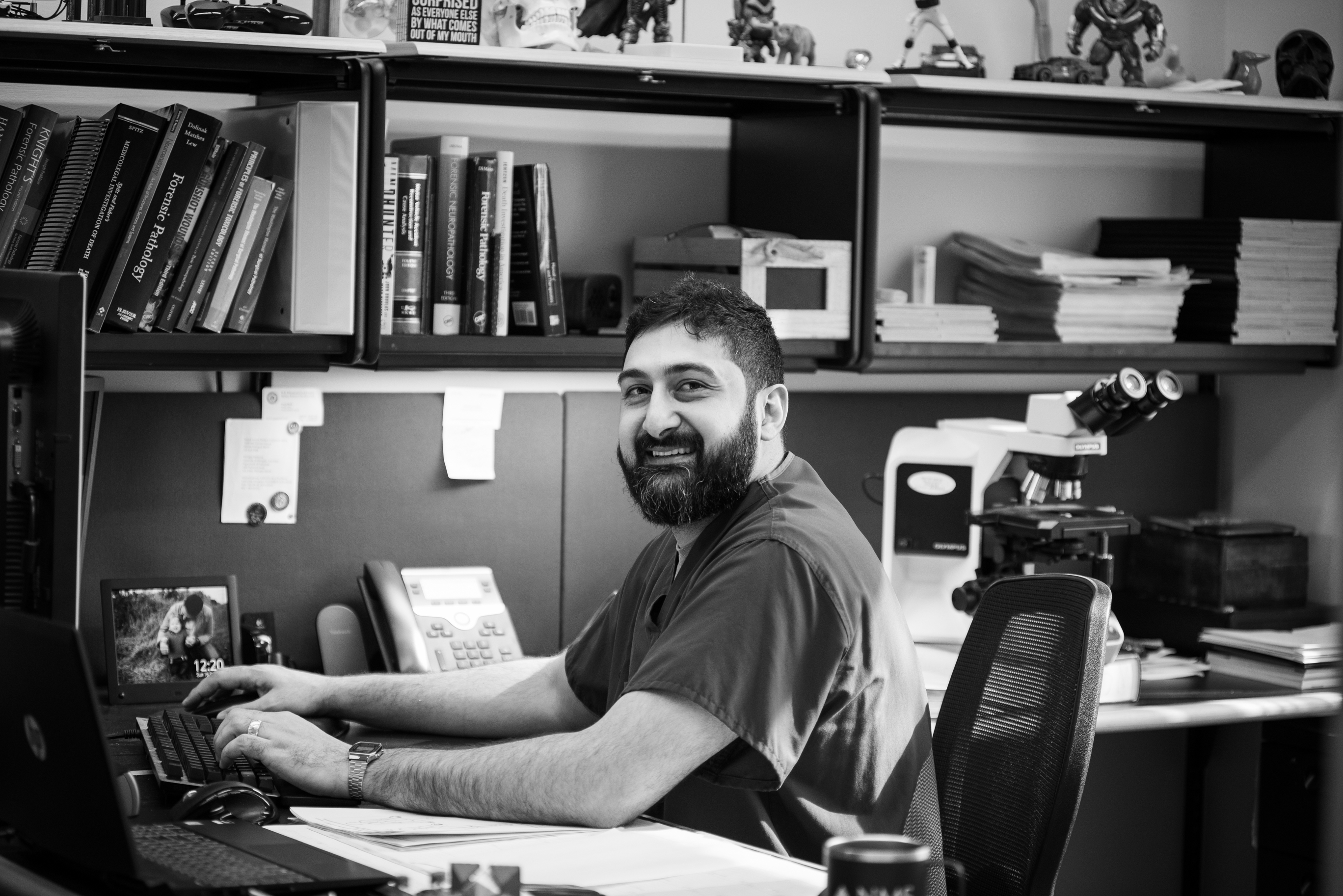 Great mentorship, at just the right time, led Milad Webb, MD, PhD, to specialize in forensic Pathology. After completing a PhD in Biomedical Engineering at the University of Nevada in Reno, Webb earned his MD at the University of Nevada School of Medicine. He then enrolled in
residency training at Michigan Medicine. “I have a strong belief that the right mentor at the right time can shape your future. Dr. Wilson and Dr. Jentzen were great teachers and great friends. I aspired to be like them.”

Wayne County is one of the elite forensic centers in America, on par with the best in the country. Wayne County’s partnership with Michigan Medicine made joining the faculty there attractive to Webb. “If you can cut your teeth in the forensic field at Wayne County, I feel like you can go anywhere,” he says. “It was a no brainer that this is what I wanted to do, where I wanted to be.”

The office at Wayne County is more than just autopsies. It is a major center of education with many of the hospitals and schools in Southeast Michigan sending their trainees through the office. Wayne State University School of Medicine, University of Michigan Medical School, Henry Ford Hospital, Beaumont Hospital, Ascension, St. John, and the Pathology Assistant program at Wayne State all send students through the Wayne County Medical Examiner’s Office and Webb serves as the Resident Training Site Supervisor. Students learn not only the practice of forensic autopsies but also anatomy and physiology, death investigation, the role of the medical examiner in the courtroom, and the interaction of law enforcement with the medical examiner’s office. Many of them choose to go on death scene investigations. “It becomes an integral part of medical training for students and it has a lasting impression,” Webb says.

Webb hopes the students he mentors won’t worry about being the smartest person in their class but rather be motivated and enthusiastic, love what they do, and put forward the best product that they can without feeling intimidated. He also wishes that more people knew how important pathology is. “The pathologist is one of the only people in the hospital that looks at something and tells you exactly what it is. We are vital in the diagnosis of nearly all human disease. It is an incredibly integral part of modern medicine, and we are completely in the background.”

Webb and his colleagues at Wayne County are hoping to shed some light on one aspect of pathology with a new podcast. Detroit’s Daily Docket is an opportunity to educate the public about what it is that medical examiners do and what happens at the medical examiner's office. “There are a lot of questions that the community has about the work that is done and there are not a lot of great places to go to answer those questions. This is a great chance for us to reach them directly. It’s a very exciting endeavor,” Webb says. The podcast’s first season will run 8 episodes and debut on Friday, February 14th.

In addition to the podcast and day-to-day responsibilities at the WCMEO, Webb has a passion for research. He’s drawing from his background in biomedical engineering to study the biomechanics of injuries, particularly in child death cases. It’s very important to document these cases, he says. “These things happen all the time, but most don't have the time or don't take the time to write them up for reference. We serve a much greater community when we publish our findings. Not just what's happening right now but everything that comes after us.”

He also has a grant through the university to incorporate photography drones into death scene investigation. Having a bird's eye view of that can give you an understanding that's really hard to grasp at the ground level. Webb is researching if this technology is something that can be incorporated into a standard protocol for the team’s investigators. A view from above may give insight to how a freeway accident occurs or enlighten investigators to pathways that a decedent used to enter a scene, or a perpetrator used to exit a scene, for example.

While Webb loves many aspects of his job, his favorite part is working with his colleagues, Drs. Leigh Hlavaty, Lokman Sung, Omar Rayes, and Carl Schmidt. “I feel like I come to work with friends. I love going to work. I love everything I do.”

Join us at the Advances in Forensic Medicine & Pathology Conference May 6 - 7.