Research from Lombard Lab Published in Journal of Clinical Investigation

By Camren Clouthier | 12 May

Research from the Lombard Lab within the Department of Pathology was just published in the Journal of Clinical Investigation. Led by Dr. David Lombard, the study featured contributions from other departmental faculty and staff including Drs. Aleodor Andea, Douglas Fullen, Zaneta Nikolovska-Coleska, and Costas Lyssiotis. The publication focuses on how the deacylase SIRT5 compound supports melanoma viability by influencing chromatin dynamics. 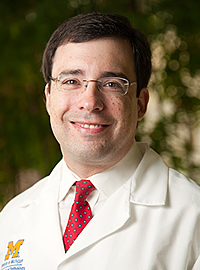 Historically, research indicates that cutaneous melanoma is among the most lethal skin cancer, and ranks third among all malignancies in terms of years-of-life lost. Despite the advent of immune checkpoint and targeted therapies, only about half of patients with advanced melanoma achieve a durable remission.

"SIRT5 is a member of the sirtuin family of protein deacylases that regulate metabolism and other biological processes," explains Lombard. "Germline Sirt5 deficiency is associated with mild phenotypes in mice."

The study shows that SIRT5 is required for proliferation and survival across all cutaneous melanoma genotypes tested, as well as uveal melanoma, a genetically distinct melanoma subtype that arises in the eye and is incurable once metastatic. Likewise, SIRT5 is required for efficient tumor formation by melanoma xenografts and in an autochthonous mouse Braf;Pten-driven melanoma model. By examining metabolite and transcriptomic analyses, experts found that SIRT5 is required to maintain histone acetylation and methylation levels in melanoma cells, thereby promoting proper gene expression.

The full publication within the Journal of Clinical Investigation is available here.