Drs. Liron Pantanowitz, Jeffrey Myers, Priya Kunju, as well as David and Elle Chapel were featured in the April 2022 edition of CAP Today Magazine, a medical science publication by the College of American Pathologists. The article focuses on the development of the AP hospitalist role at Michigan Medicine.

"We were creative in developing a job description for the AP hospitalist," says Dr. Pantanowitz. "We wanted to fashion a new position that would not just be viewed as a stepping-stone to get into our Department, but as a formal career pathway." Additionally, the idea of Digital Pathology and virtual resources, specifically within frozen section analysis is on the rise, notes Dr. Myers. "The complexity of our cases and the high volume of our frozen section service demanded a pathologist on site at the hospital," he explains. "We needed someone to be on service all the time." Eventually, this parlayed into the Department launching the hospitalist subspeciality. 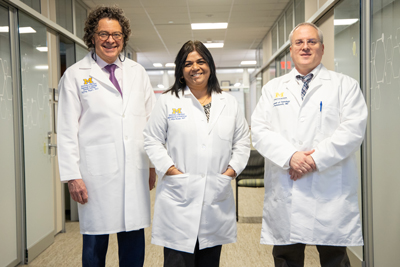 The creation of these AP hospitalist roles opened the door for Drs. David and Elle Chapel, who joined the Department of Pathology in 2021. The Chapels indicated that one reason the roles appealed to them is because it allowed for more interaction with hospital staff, including a variety of surgeons and clinicians. "Having someone that [the] surgeons can see as the go-to person, I think will be sought out by other hospitals," describes Elle.

As the hospitalist practice continues to expand and develop, both Myers and Pantanowitz note that the response of the program has been very positive overall. "We do know that [surgeons] have improved satisfaction and are happy to have someone around all the time to solve problems, both expected and unexpected," says Pantanowitz. Ultimately, the goal for the program is to have it recognized as a future new area of subspecialization.

"I was excited about the opportunity to blaze this trail," concludes Dr. David Chapel.

The full digital story within the April edition of CAP Today Magazine is available here.