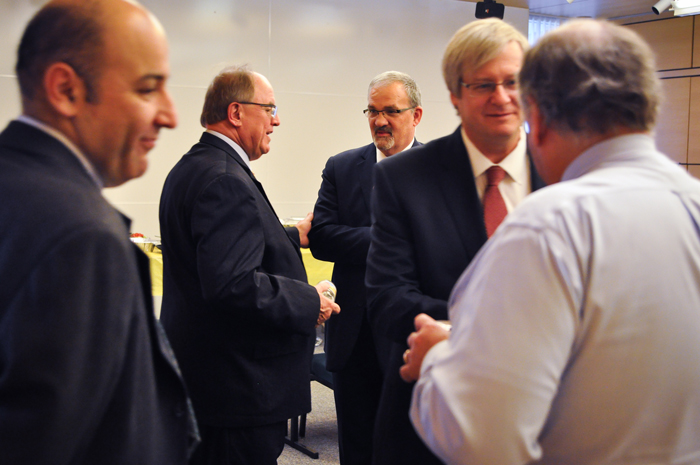 (Left to Right): Mouhanad Hammami, Tom Kochis, Jeffrey Jentzen, Charles Parkos, Carl Schmidt. | Photography by Kelly Root
Death doesn’t stop for holidays or budget cuts, explains Albert Samuels, office administrator for the Wayne County Medical Examiner’s Office (WCMEO) in Detroit. Yet in 2007, funding for WCMEO plummeted in the wake of county-mandated budgetary cuts. The office was forced to eliminate 4 of its 8 forensic pathologists and cut back on support staff. Remaining employees soon became overworked, fatigued, and unable to keep pace. Turnaround time for autopsy reports increased, and WCMEO struggled to maintain its high standards of service. But the bodies kept coming: 14,000 death calls a year, leading to 2,500-3,000 autopsies or inspections. That’s roughly 7 bodies a day, 365 days of the year.

Medical examiner’s offices, and the forensic pathologists who work for them, perform an essential public service. The word “forensic” derives from the Latin forum, meaning “public,” and forensic pathologists determine the cause of any deaths that may affect the public interest, including deaths from unnatural causes such as gunshot wounds, car accidents, and suicide. Today’s medical examiner system originated in New York City in the 1900s. Medical examiner’s offices are government bodies with close ties to the legal system. Because of this, becoming a forensic pathologist requires training not only in medicine, but also in courtroom testimony and criminalistics.

Despite their importance to society, there is a critical shortage of forensic pathologists. In 2009, a major federal study entitled Strengthening Forensic Science in the United States: A Path Forward, recommended that forensic pathology ultimately be centered in academic institutions. This would allow individual counties to take advantage of a university’s research and educational offerings while raising the status and standard of forensic medicine. Yet support of forensic medicine has not been typical of academic medical centers, which focus on teaching and basic science, and are not used to coordinating with the government and the legal system.

As WCMEO was struggling with budget cuts, the Department of Pathology was interested in starting a forensic pathology fellowship program within the U-M Health System. Department administrators—including then-Director of Anatomic Pathology, Jeffrey Myers, M.D., the A. James French Professor of Pulmonary Pathology; Department Chair, Jay Hess, M.D., Ph.D., M.H.S.A.; and Director of the Division of Finance and Administration, Marty Lawlor—collaborated with the Washtenaw County Board of Health, developing a plan to more fully integrate the UMHS autopsy and forensic service with the activities of the Washtenaw County Medical Examiner’s Office. Jeffrey Jentzen, M.D., Ph.D., was recruited to serve as both director of UMHS Autopsy and Forensic Services and chief medical examiner for Washtenaw County. Yet a challenge remained: Unlike Wayne County, Washtenaw County does not receive a predictable number of bodies in need of forensic autopsies. Explains Jentzen: “It’s much harder to plan what kind of experience [students will] have. It depends on that day, or that year.”

Despite their importance to society, there is a critical shortage of forensic pathologists.

Jentzen and Carl Schmidt, M.D., the chief medical examiner for Wayne County, envisioned a collaboration that would incorporate WCMEO into the Department of Pathology. This would allow U-M to join a handful of other medical schools currently partnering with a medical examiner’s office. The Wayne County pathologists would become Medical School faculty, and U-M’s forensic pathology fellowship (which would become one of only about 40 in the nation) would offer training at sites in both Wayne and Washtenaw Counties. Further, WCMEO would have access to UMHS services, such as histology, resulting in significant savings for the budget-strapped office. With the support of UMHS administrators and their counterparts in the Wayne County Health Department, this partnership was launched in 2011.

Over time, the U-M’s role expanded to provide salary support for WCMEO’s remaining administrative and support staff, autopsy technicians, and death investigators, as well as a staff photographer to document autopsies and offer on-site IT support. Wayne County does retain oversight of its primary facility, but all other services are provided by the U-M, including administrative support from the finance team and expanded IT support from the Pathology Informatics Division in Ann Arbor. 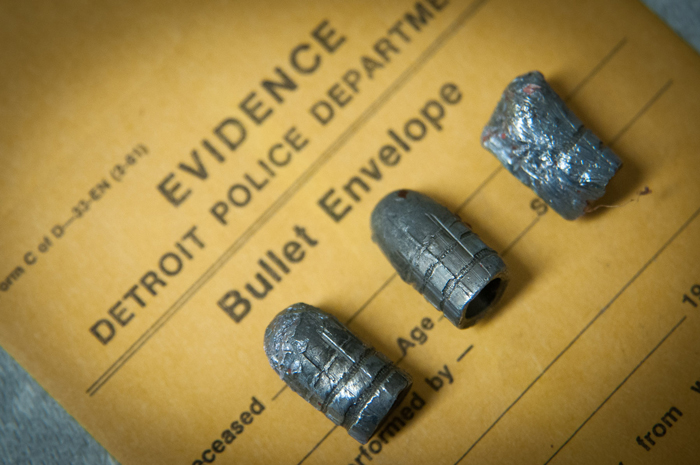 Evidence package of bullets found at a crime scene.
| Photography by Kelly Root 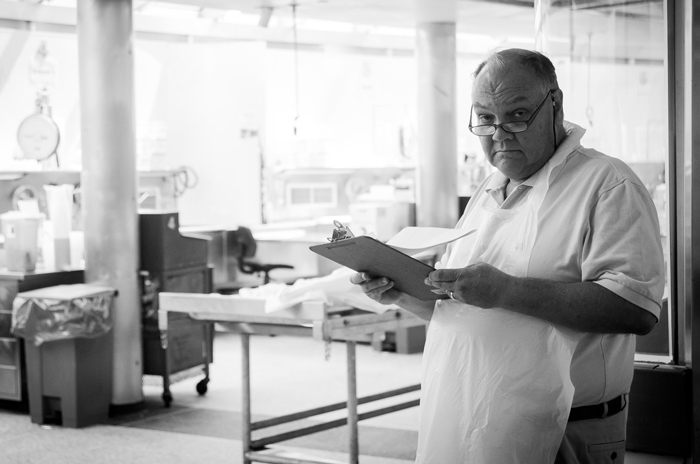 Carl Schmidt, M.D., Chief Medical Examiner, reviewing pre-autopsy report.
| Photography by Kelly Root The benefits of this partnership became evident immediately. The U-M has admitted a succession of high-quality applicants to its fellowship program and attracted motivated faculty. Additionally, “We’ve increased the reach of our bench, so to speak,” says Jentzen. “We have staff who are mobile and can assist in a specialty role or for general coverage in Washtenaw County when they’re needed.”

Similarly, WCMEO has seen a dramatic increase in the number of applications received for once hard-to-fill positions. Now applicants from across the continental United States vie for employment. “We hired an investigator from Virginia less than a year ago. We get applicants from Oregon, Washington State, California. We had over 120 applicants for just two autopsy technician spots,” says Samuels. “We’re getting the cream of the crop.”

Even with sufficient funding, working at a medical examiner’s office isn’t easy. Leigh Hlavaty, M.D., deputy medical examiner for Wayne County, states, “We see the worst that men can do to themselves and to others. It takes a toll on us in ways we can’t grasp and understand.”

Each year in the United States, between 35 and 40 new forensic pathologists are board certified. However, “about a third of them don’t end up practicing the specialty because they had difficulty with the violence they were exposed to or found going to court stressful,” explains Schmidt. Now that the office’s staffing needs are met, the U-M can provide additional services to help employees, and the families they serve, manage the grief that comes with death.

Looking for ways to improve patient care, Pathology’s Division of Quality and Health Improvement reached out to the U-M School of Social Work. The two units are now collaborating to launch a pilot program, based upon a model observed by WCMEO forensic pathologist, Francisco Diaz, M.D., during his residency in Philadelphia, in which social work students are embedded at the medical examiner’s office. A similar collaboration is also in place between the Cook County Medical Examiner’s Office and the University of Illinois – Chicago’s Jane Addams College of Social Work. U-M School of Social Work’s Susan Sefansky, LMSW, ACSW will provide faculty mentorship to two interns who will provide support and training to both staff and patient families, working at the WCMEO office two days a week for the entire calendar year. 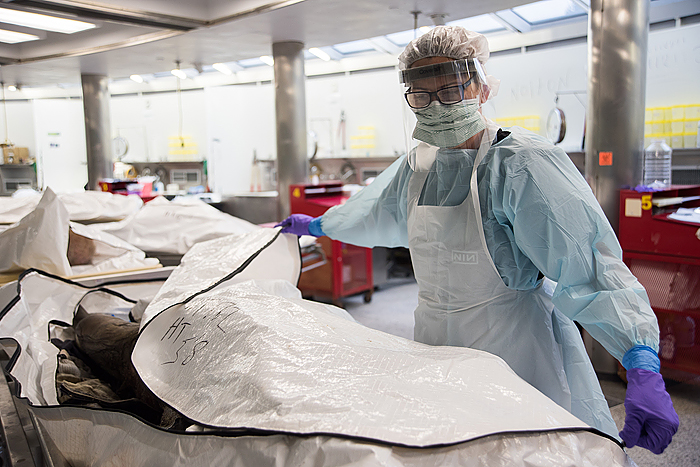 Leigh Hlavaty, M.D., deputy medical examiner, preparing for an autopsy. | Photography by Kelly Root Hlavaty, the pathology faculty lead for the pilot, explains, “Many times we are dealing with violence or drugs and the aftermath it leaves in these families. Even with natural findings, there can be ramifications.” For instance, identifying an underlying natural disease in someone who has died young can increase anxiety in survivors, who may be grieving the death of a spouse and worrying about the effect the disease could have on their children. School of Social Work students will assist with training to guide the decedent’s next of kin in sharing the news of their loved one’s death with others. The student interns can also provide crisis intervention and management, as well as support for families working their way through a number of difficult and often unfamiliar tasks, everything from viewing the body to filling out paperwork.

Social work students can connect families with community resources that assist with funeral expenses and provide ongoing grief support. The students also check in later with families, a task that has traditionally fallen on WCMEO’s clerical staff and death investigators, many of whom have not received formal training. With the arrival of Sefansky and the social work interns, WCMEO staff will have the opportunity to receive additional training in how to assist families in need. “We bring a tremendous amount of social work experience to the table,” says Sefansky. She hopes this new service will also be incorporated into pathology residents’ rotations, enabling residents, faculty, and staff to debrief after their experiences working with unnatural deaths.

Now that the office's staffing needs are met, the U-M can provide additional services to help employees, and the families they serve, manage the grief that comes from death.

The partnership between WCMEO and the U-M is not a traditional way to provide forensic pathology service to a large metropolitan city. “There were a lot of skeptics,” says Jentzen “but I think overall it’s become a successful model for other cities and universities to follow.” This kind of partnership ensures that the public has access to forensic pathologists. It also opens up new opportunities for research and discovery.

One example is a project initiated by Schmidt in 2014, which has come to be known as the Human Postmortem Microbiome project. It was recently described in The Living Dead, a New York Times Magazine article by Peter Andrey Smith. By studying swabs taken from the thousands of bodies autopsied at WCMEO each year, Schmidt and researchers from two other universities have identified differences in the bacteria on male versus female bodies, as well as on the bodies of those who have committed suicide versus those who are victims of homicide. Observations from this study have also been used to better estimate time of death. Discoveries like these provide knowledge to families and could profoundly affect how forensic science is applied within the judicial system. At the end of the day, when it comes to forensic pathology, public health, public safety, and personal justice are all at stake.

Albert Samuels, office administrator for the Wayne County Medical Examiner’s Office(WCMEO), looking through the artifact gallery in a hallway of the WCMEO.

Faculty and staff from both Detroit and Ann Arbor campuses.

Brain slices from a Wayne County case are examined during Brain Conference held at the Ann Arbor campus.

Architecture of the WCMEO building in Detroit.

Autopsy room at the WCMEO.