Notch Activation and Immune Responses
Notch is a heterodimeric cell-surface receptor that is involved in a broad range of differentiation processes, including the lineage choice between T or B lymphocytes. Mammals have four different Notch receptors (Notch1-4), which bind two conserved families of ligands, known as the delta-like ligands (consisting of DLL1, DLL3 and DLL4) and the jagged ligands (jagged1 and jagged2). In the immune system, Notch-mediated responses have been shown to regulate T cell development in the thymus. In addition to its role in T cell lineage maturation, recent studies have also shown that Notch/Notch ligand signaling regulates mature peripheral T cells during antigen-specific response. The requirement of Notch signaling for Th development has recently been appreciated. Amsen et al. demonstrated that MyD88-dependent Th1 stimuli increase the expression of Notch ligand delta-like 4 in dendritic cells and controls the differentiation of naïve T cells into Th1 cells, whereas MyD88-independent Th2 stimuli up-regulate the Notch ligand jagged and polarize toward Th2 cells. The importance of Notch signaling in T cell differentiation has been supported using inhibitors of γ-secretase (which prevent the activation of the Notch signaling pathway), to block Th1 responses through the blockade of T-bet expression.  Furthermore, Notch intracellular domain (NICD) up-regulates IFN-γ expression. In contrast, Tu and colleagues showed that Notch signaling was required only for Th2 cell responses by using dominant negative mastermind-like (MAML)-CD4 transgenic mice. Moreover recent reports showed that Notch mediated binding of RBPJκ to GATA-3 promoter enhanced GATA-3 expression, resulting in Th2 commitment in the absence of IL-4. In contrast, studies have shown that delta-like ligands (Dll1 and Dll4) play a regulatory role in T cell activation by modulating Th2 cytokines. It has also been suggested that jagged1-mediated Notch activation specifically induces Th2 responses in the lung.  Thus, our studies in the laboratory have focused upon what role do individual notch ligands, expressed by DC, have on the development of T cell mediated immune responses.  In particular, we have been focused upon Dll4 since it is strongly upregulated in RSV-infected and allergen stimulated DC.
Our data has outlined 3 primary areas where Dll4 seems to be involved in regulation of T cell responses. 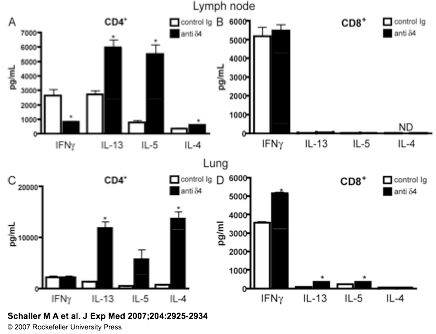 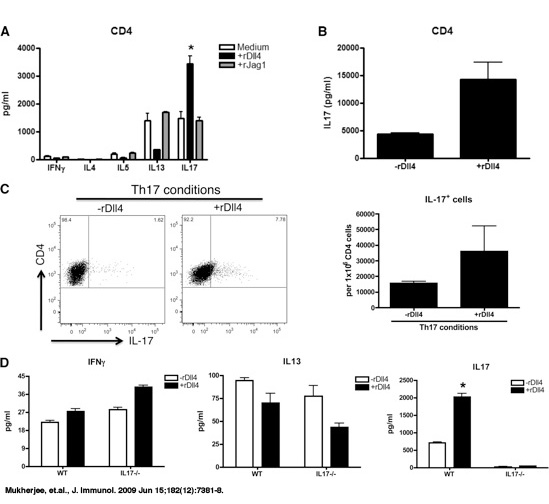 Modulation of T cell responses by Dll4 under Th17 skewed conditions. A, CD4+ T cells were activated under Th17 conditions with medium alone or in the presence of rDll4 (2.5 µg/ml) or rJag1 (0.5 µg/ml) and the supernatants were analyzed for indicated cytokines. B, CD4+ T cells were differentiated under Th17 conditions in the presence or absence of rDll4 for 5 days, rested for 3 days and then viable cells were restimulated with plate bound anti-CD3 and soluble anti-CD28 for 24 h. Following stimulation, the supernatant was analyzed for IL-17. Each experiment was repeated at least four times with similar results. The data are expressed as the mean ± the SEM and *, p  0.05 was considered significant. C, T cells were activated as described above for 36 h and a mixture of protein transport inhibitors was added to the culture for the last 6 h of stimulation. The cells were then harvested for CD4 surface staining and IL-17 intracellular staining by flow cytometry. IL-17+ cells were gated on CD4+ T cells. D, MACS purified CD4+ T cells from WT and Il17–/– mice were stimulated under Th17 conditions and after 48 h the supernatant were analyzed for indicated cytokines using a luminex system. The data represent the mean ± the SEM and *, p = 0.004. 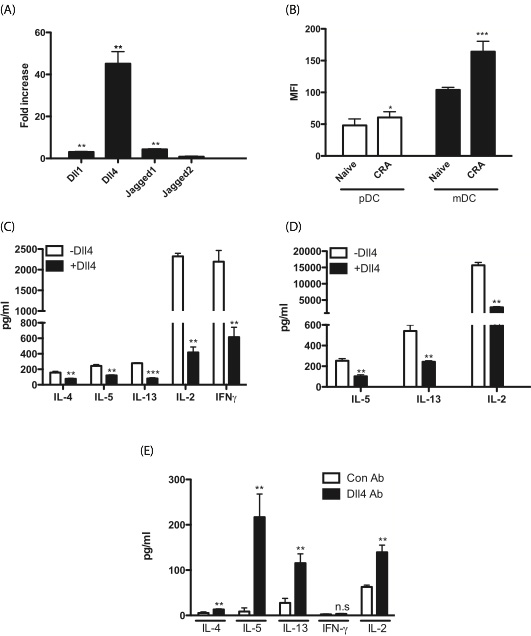